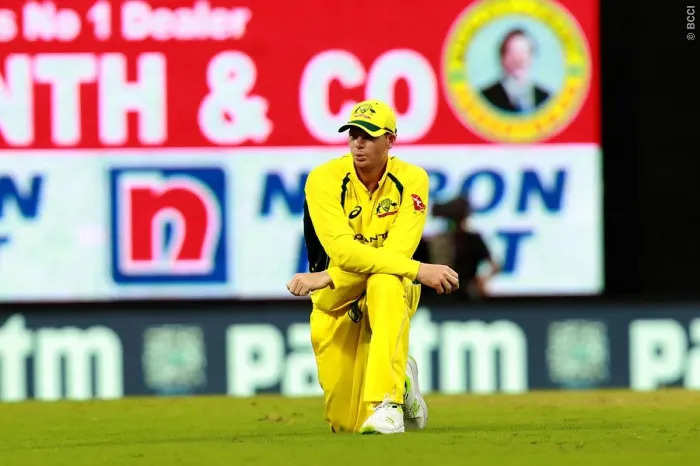 Australia made a winning start to the 3 match ODI series against England on Thursday at the Adelaide Oval. Thanks to blistering half centuries by Steve Smith and David Warner, the NSW boys gave yet another NSW boy in Pat Cummins winning start as Australian ODI skipper.

This is the first time Pat Cummins is leading the ODI side after the retirement of Aaron Finch post the New Zealand series. Australia now go to Sydney armed with an early lead against their hated rivals for the 2nd ODI to be played on Saturday.

England batted first and scored 287 on the board, thanks to a century by Dawid Malan. The left hander, had missed the Semi Finals and the Final of the 2022 T20 World Cup. Malan scored career best 134 off 128 balls with 12 fours and 4 sixes to help England reach 287.

Steve Smith was seen telling David Warner “I’m Back Baby”. This had the commentators laughing at the remark by the former Australian captain to his former vice captain.

Chasing 288 to win, Australians had a new opening pair in David Warner and fellow left hander Travis Head. The pair added 147 runs for the 1st wicket as both went after the English bowling and scored at over 7 runs per over.

Head was the first to go after scoring 69 runs off 57 balls with 10 fours and a six as he fell to Chris Jordan caught by Salt. This was Head’s 13th ODI half century in his 49th game for Australia.

Smith joins Warner to pile on the misery for England –

Steve Smith hardly got a run in the side during the ICC T20 World Cup, joined Warner in the middle. The pair kept the scoreboard ticking with a quick 53 run stand for the 2nd wicket as both scored freely.

Warner looking good to get a century fell against the run of play. The left hander was dismissed by David Willey caught by Sam Billings for 86 off 84 balls with 10 fours and a six in his innings.

Steve Smith steers his side to an easy win –

England struck a 3rd time when they had Labuschagne out for 4, but Smith and Alex Carey then added 38 runs as Carey was out for 21 off 28 balls with 3 fours. Smith and Green then saw no more wickets fall as the duo took the side home to a 6 wicket win with over 3 overs to play.