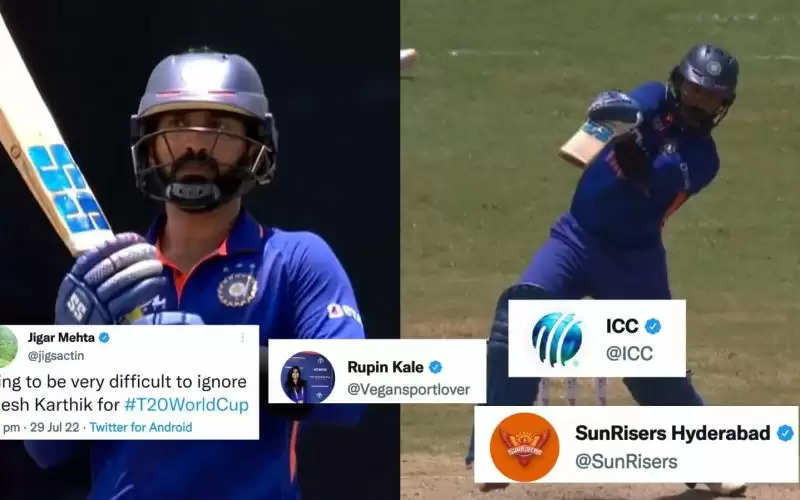 India put out a strong show as they over came the West Indians by 68 runs during the first T20 which was played at the Brian Lara cricket Ground at Trinidad and Tobago. On the back of the win India now take a 1-0 lead in series before back to back games. India now moves to St. Kitts for the next two games which will be played on Monday and Tuesday. India dominated the hosts in all aspects of the game and outclassed the opposition at every point of the game. One man who made the difference was the newest Mr.360 Dinesh Karthik.

India had lost their 5th wicket when they were at 127 and Rohit Sharma had just departed for 44 ball 64 off 7 fours and 2 sixes. India needed some life their innings as they looked to reach at least 160 -175 on the board. Dinesh Karthik batting at 7 began by being watchful earlier, but once he found his groove there was no stopping him. Karthik played some of the most outrageous shots and some really delightful ones.

The left- right combination in one single ball -

Karthik scored 41 off 18 balls with 4 fours and 2 massive sixes, one of the boundaries defined everything DK is about. The incident happened in the 5th ball of the final over of the innings. DK was facing Obed McCoy and was setting himself up for a reverse hit, but the ball was about to be bowled down the leg side. Thats when Karthik changed his grip and became a left hander and played a cultivated upper cut for four before hitting one more four to help India to 190.

Chasing 191, the home team began the chase in a brisk manner and scored 22 runs in nearly 9 balls. That's when Arshdeep Singh struck when he had Mayers caught by Bhuvneshwar Kumar. It was the turn of Jason Holder to be bowled by Jadeja when he was promoted to number 3. None of the West Indian bowlers had answers to the incisive bowling from India.

The breezy innings of Dinesh Karthik had the fans on their feet and you can read all the tweets below.

The new impact man of India in T20I - Dinesh Karthik the finisher. pic.twitter.com/zZ3LilztLe