Watch! Daryl Mitchell’s six lands the ball into the beer cup of a fan in the crowd 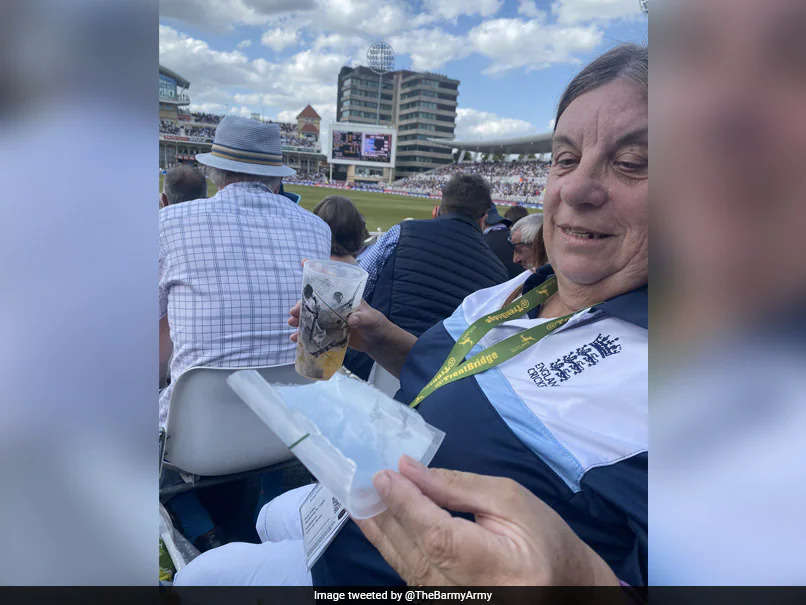 Trent Bridge was the venue as the 2nd test match between England and New Zealand kicked off. England have a 1-0 lead in the series after having won the first rest at Lord’s after a brilliant ton by Joe Root. Kane Williamson the Kiwi skipper was ruled out after having tested positive for COVID-19. Tom Latham took his place as skipper as Matt Henry replaced Ajaz Patel. Michael Bracewell came in for De GrandHomme and Nicholls replaced Williamson. The English team made no changes as Jack Leach was fit and made his way to the XI ahead of Parkinson.

Trent Bridge ground in Nottingham is known for its vibrancy and its cray fan support. The incident happened when the score was 216 for 4 with Leach bowling to Mitchell. The kiwi batsman stepped down the track and lofted the ball straight down the ground for a huge six. There was laughter in the commentary box as England bowler, Matthew Potts signalled the ball had fallen into someone’s beer glass in the stands.

A post shared by We Are England Cricket (@englandcricket)

England won the toss and chose to bowl first, on what was a bright day at Nottingham. Tom Latham and Will Young opened the batting and scored at over runs per over to add 84 for the first wicket. Young was aggressive in his approach as he scored 47 off 70 balls. Captain Stokes got the 1st wicket when he had Young caught by Crawley to make it 84 for 1. It was soon 84 for 2 as Latham was caught by Potts off Anderson for 26 off 60 balls to make it wicket 647.

Conway and Nicholls steady the ship before England strike once more –

The mantle of scoring runs quick was taken on by Devon Conway who scored 46 off 62 balls with 7 fours. At the other end, Nicholls played a steady hand and scored 30 off 52 balls with 4 fours. The pair added 77 for the 3rd wicket, before Stokes got the wicket of Nicholls to give England a much needed breakthrough. It was wicket number 648 for Anderson as Conway was caught behind by Foakes to make it 169 for 4.

Mitchell and Blundell grind out the English attack once again –

England must be tired at the mere sight of Mitchell and Blundell after their 195 run stand in the 2nd innings at Lord’s. The pair put the English bowlers to the sword again as they have added 149 for the 5th wicket so far. Mitchell had scored 108 at Lord’s while Blundell was out for 96. At Trent Bridge, the pair are looking to do much more damage than what they did at Lord’s. Mitchell is not out on 81 off 147 balls with 9 fours and 2 sixes, while Blundell is not out 67 off 136 balls with 8 fours. New Zealand have scored 318 for 4 from 87 overs and will look to push on the advantage on the 2nd day.