Watch! David Warner takes a blinder to get rid of Dhananjaya De Silva 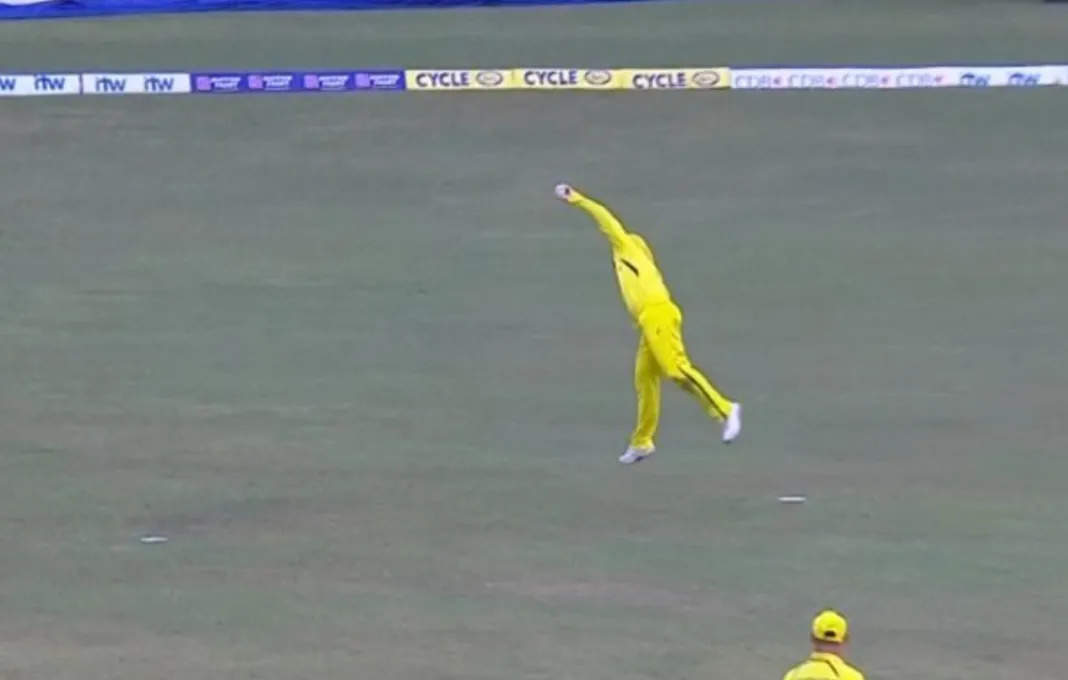 Australian cricket team are a relentless machine, as they are taking on all comers. Ever since their World T20 win, the Aaron Finch led side have shown their ruthless side. After having the T20 series 2-1, Australia are playing a 5 match ODI series against Sri Lanka. The first match was played at Pallekele, which was the venue for the pulsating final T20 which saw the home side chase 59 from 18 balls. Australia won the game by 2 wickets after rain played spoilsport for a while before the game was re-started with reduced target.

Sri Lanka had made an amazing start tom the game, with the openers powering them to a century plus run stand. The visitors came back into the game with 2 quick wickets, that’s when De Silva walked inn at number 4. He was slow to begin with and was trying to break free. That’s when he jumped down the wicket to try and hit Agar over the field. The batsman couldn’t connect well with the shot and saw David Warner at the edge of the circle. The Australian opener timed his jump to perfection and caught a brilliant one handed catch.

Batting first, the opening pair of Pathum Nissanak and Dhanushka Gunathikala added 115 in very quick time. Both the batsmen were putting the bad balls away and picked the right lengths and spots to hit. Just when they looked good for more, Gunathikala was run out for 55 off 53 balls. Kusal Mendis walked in at 3, with the score reading 118 the home team lost Nissanka for 56, caught by Finch off Agar. Post the fall of De Silva, Mendis and Asalanka added 77 for the 4th wicket, before Asalanka fell for 37. The Sri Lankans lost few quick wickets before Hasaranga strode to the wicket. Mendis was not out on 86 off 87 balls with 8 fours and a six. Hasaranga played the perfect late over’s cameo with 37* 0ff 19 balls with 6 fours, as 5 off them came in one over from Richardson.

Glenn Maxwell takes the Australians home in a pulsating chase –

Chasing 301 to win, the Sri Lankans got the first wicket when they had Warner out for zero. Finch and Smith then added 67 for the 2nd wicket before the Australian captain fell for 44 off 41 balls. He was dismissed by Hasaranga and just then the heavens opened up. The match was put on hold for more than an hour. When it resumed the target was 282 from 48 overs. Smith and Labuschagne added 54 for the 3rd wicket before Labuschagne was out for 24, followed by Steve Smith for 53. The visitors were at 141 for 4, when Stoinis came out to swing his bat. Stoinis was out for 44 off 31 balls, that’s when the home side picked a flurry of wickets. Glenn Maxwell batting at number 7 though, changed the course of the game with 80 off 51 balls. His innings had 6 fours and 6 sixes as Australia won by 2 wickets. Hasaranga picked 4 wickets with the ball.