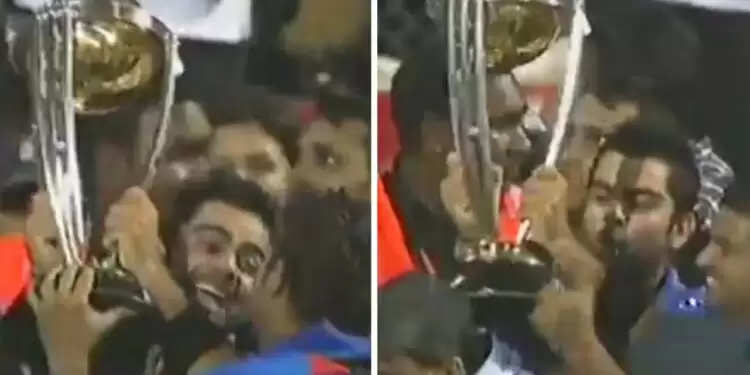 Indian cricket team gets a lot of love from it fans and every player from the team is treated as a member of the family. Ever since the 1983 world cup win the Indian cricket’s craze has seen it hit a fever pitch like none other.

India achieved its night of celebration when they won the world cup on 2nd April, 2011. India, beat Sri Lanka by 6 wickets at the Wankhede Stadium to win their 2nd ever ODI world title. This was 28 years after they achieved the feat under the captaincy of the great Kapil Dev.

Gautam Gambhir’s 97 and MS Dhoni’s unbeaten 91 helped India achieve the win and spark massive celebrations across the nation. It was Sachin Tendulkar’s, final world cup and it ended with him getting his hands on the elusive trophy in his own home ground in front of his fans in Mumbai.

There is a 8 second video clip which has gone viral of Virat Kohli and Suresh Raina. The duo can be seen running lap of the ground holding the world cup trophy. For some reason they use the trophy to hit the head of a man running ahead of them.

The man can be seen rubbing his head after getting hit, as Raina can be seen saying something and Virat Kohli is seen giggling. The 8 second video got over 17000 likes and has been circulating like wild fire.

Caught on camera. Kohli and Raina deliberately hitting a guy on his head with the 2011 World Cup trophy 😂😂😂pic.twitter.com/51Dg8Elg5j

India will be facing New Zealand in a 3 match T20 series which begins on Friday. Hardik Pandya will be the Indian captain as the big names have been given a rest for the series. This series will be the start of the next cycle of preparation for the 2024 T20 World cup which is to be held in West Indies and USA.