Watch! Deepak Hooda loses his cool at the umpire during the 1st T20 versus Sri Lanka 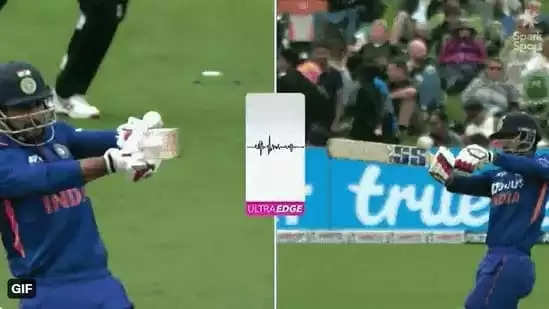 Watch! Deepak Hooda loses his cool at the umpire during the 1st T20 versus Sri Lanka

Indian cricket welcomed 2023 as they got busy with their international cricket commitments. The first opponents of the year were Sri Lanka as Wankhede Stadium, Mumbai played host to the 1st T20.

It was a huge test for Hardik Pandya as he was captaining the Indian side for the first time in home conditions. It was also the 1st time, India were playing at Mumbai without local hero Rohit Sharma or master batter Virat Kohli. It is the same venue where Pandya began his journey with the Mumbai Indians in the IPL.

Sri Lanka won the toss and chose to bowl on a surface which promised runs. The bowling during the 2nd innings being difficult due to the dew in the ground. India had two debutants in former Under-19 world cup winning teammates of 2018. Shubman Gill and Shivam Mavi were the latest entrants to the Indian T20 brigade.

Hooda loses his cool at the umpire –

Deepak Hooda who was long being asked to be bought into the Indian side by the fans, finally got a game. The incident in question happened in the 18th over of the innings. Hooda was facing Rajitha, who spotted the batter make a move to the off side and bowled it wide.

The umpire did not give the ball wide and this was met with shock by Deepak Hooda. The right hander was quick to question the umpire who did not give the extra runs for India and seemed to have some rather tense words with the official.

Ishan Kishan who scored the fastest ODI double ton in his lasty Indian appearance began well. Gill, making his debut in T20I cricket was out for 7 LBW to Theekshana. New vice captain Surya Kumar Yadav was out while trying to scoop Karunaratne and fell for 7. Sanju Samson went for an ugly hoick and was out for 5 caught by Madhushanka off Theekshana.

Kishan and Pandya falls as Hooda and Axar steady the ship –

Ishan Kishan scored 37 off 29 balls with 3 fours and 2 sixes before falling to Hasaranga. Captain Pandya was joined by Hooda in the middle. Madhushanka got the key wicket of Pandya caught behind for 29. Axar Patel and Deepak Hooda then added 68 runs for the 6th wicket to help India post 162/5. Patel scored 31* off 20 balls with 3 fours and a six, while Hooda scored 41 not out off 23 balls with 1 four and 4 sixes.