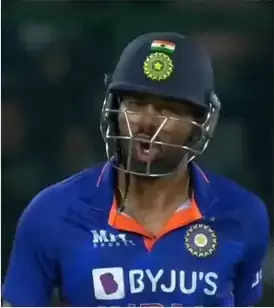 It was a bitter sweet day for Hardik Pandya, as the 28-year-old was making his comeback to the Indian side. Pandya last played for India late November last year in the T20 world cup. His lack of form and fitness meant he was dropped from the side and saw Venkatesh Iyer take over his spot as all-rounder. After successfully leading his new side Gujarat Titans, to a win the man named Kung-Fu Pandya was back. Not only was he back but he also was named the vice-captain after KL Rahul got injured and Pant was elevated to the captaincy. It was bitter in the sense that Pandya’s return game saw India lose the game to go 1-0 down in the 5 match T20 series.

Delhi crowd show their displeasure after Pandya turns down a single –

The capacity crowd at the Arun Jaitley stadium were in for a treat as far as batting was concerned, as over 400 runs were scored. There were fours thudding into the advertising boards, and sixes flying into the crowds. The incident in question happened towards the end of the Indian innings. It was the 2nd last ball of the 20th innings and Pandya was on strike. Pandya dug-out a Yorker from Nortje and the ball sped to the deep mid wicket region. Much to the shock of many, Pandya denied a single which would have seen DK take strike for the last ball. This got the crowd to boo Hardik Pandya in what was seen as a selfish move.

Hardik Pandya came into the game back of a 400 plus season in the IPL while batting at number 3 and 4. On Thursday he batted at 5 and showed no signs of rust as Pandya scored 31 off 12 balls. The sixes flowed from his blade as he smacked 3 huge sixes during his innings along with 2 fours. Pandya who started bowling again and at good speeds in the IPL failed to do the magic. His single over cost the Indian team 18 runs as Dwayne Pretorius smacked him for 3 sixes in an over, as Pant never gave the ball back to his deputy to bowl.