Watch! Dewald Brevis takes the CPL by storm with his cameo 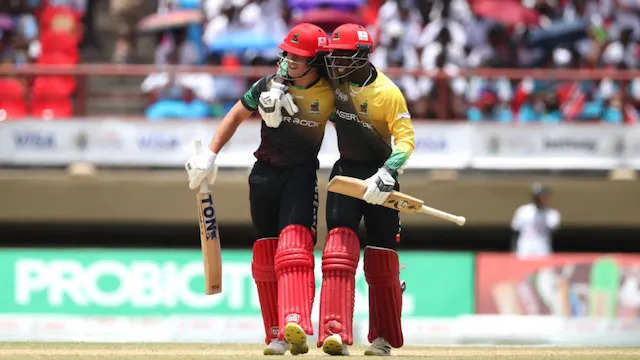 T20 cricket is the flavor of the season, as international cricket and franchise cricket are at full flow. The world is waiting for the 2022 show piece of T20 World Cup to start in Australia. In the Caribbean the cricket fans are witnessing some top notch cricket being played in the Caribbean premier league. One of the players who has caught the fancy of the world is none other than, Dewald Brevis. The young South African has been compared to legendary AB De Villiers.

Dewald Brevis first shot to limelight this year during the Under-19 world cup which was held in the West Indies. He was soon bought by Mumbai Indians to play for them during the TATA IPL 2022 season. Brevis in the game time he got regaled the Mumbai fans with his daredevil batting.

Baby ABD lights up the Providence –

Dewald Brevis is currently playing for the St Kitts and Nevis Patriots. The Patriots were taking on Trinbago Knight Riders in the 26th game of the tournament. The moment happened in the 19th over. Brevis was facing West Indian left arm spinner Akeal Hossein and the first ball was a dot ball. The 2nd ball, Brevis swept the bowler deep into the stand for a huge six.

The 3rd ball saw Brevis come down the track and deposit the ball deep into the crowd for a huge six. The 4th ball, saw Brevis stay rooted to the spot and smack Hossein over the leg side boundary for a six.

The last over of the innings was bowled by Daryn Dupavillion who had the wickets of Sherfane Rutherford and Rashid Khan off successive balls. Bowling to Brevis for his hattrick, the bowler saw him being carted for a six. The last ball of the innings was also met with the same result to help the Patriots reach 163.

Rutherford top scores for the Patriots –

Batting first, Patriots were struggling at 28 for 3, after Russell, Hossein and Samit Patel struck blows with the ball. Andre Fletcher was out for 12 ball 2, followed by Kacey Carty for 5. Evin Lewis was out for 15, but Darren Bravo with 23 help Rutherford resurrect the innings. Rutherford top scored with 78 off 50 balls with 6 fours and 5 huge sixes.

Chasing 164 to win, TKR began well with Tim Seifert scoring 59 off 47 balls with 4 fours and 3 sixes. Regular wickets though did not help their cause as Rashid Khan bowled a tight spell including a maiden over. Andre Russell struck 29 off 24 balls but that wasn’t enough. Patriots ran out winners in the game by 7 wickets, with Sheldon Cottrell picking 3 wickets.