Watch! Dinesh Chandimal’s hits a huge six out of the ground but watch what happens next 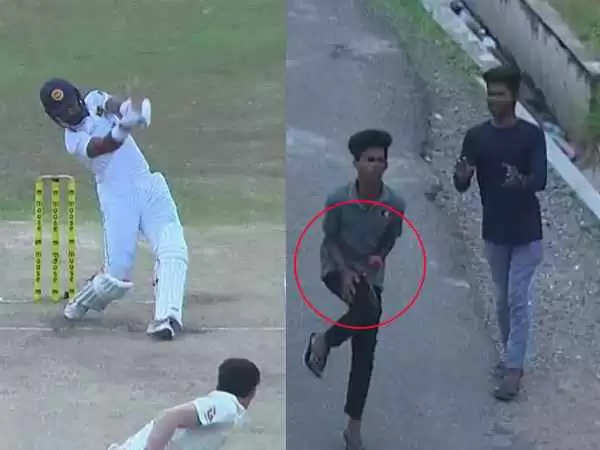 It was an happening day 5 for Sri Lanka who started the day still batting their first innings. By the end of the day, Sri Lanka had managed to beat the Australian team by an innings and 39 runs. This win helped Sri Lanka draw the series level at 1-1 on a dramatic day 5 of the 2nd test at Galle.

Dinesh Chandimal has been in and out of the team owing to patchy form with the bat. On Monday, the 32 year old decided to throw caution to the wind as he scored his first double century. The moment of the day happened when Chandimal, heaved Starc out of the ground for a huge six. The ball landed in the road and the right hander reached 195, but more drama was yet to come. The ball bounced on the road and hit a boy who was walking with his friends. One of his friends threw the ball back into the ground. Very next ball Chandimal swung again and it went for 2 successive six to help him reach his first ever 200. He celebrated wildly as his team mates and family were proud of his knock.

Trailing by 190 runs and needing a draw to win the series, Australia began with Khawaja and Warne adding 49 runs for the 1st wicket. Ramesh Mendis got the key wicket of Warner for 24. This was followed by Khawaja falling for 29 caught by Oshada Fernando off Jayasuriya. 4 balls later the left arm spin of Jayasuriya got the wicket of Smith for a duck. Ramesh Mendis then got into action as he got rid of Head for 5. Labuschagne and Green tried to hit their way out trouble but their 38 run stand was broken when Jayasuriya trapped Marnus LBW out for 32. From there it was all downhill as Australia were bowled out for 151. Jayasuriya picked 6 wickets for the 2nd time in the to end with match figures of 12/177. Sri Lanka won the game by an innings and 39 runs to tie the series 1-1.