Watch! Drama at first game of the season in the TNPL as tempers fray 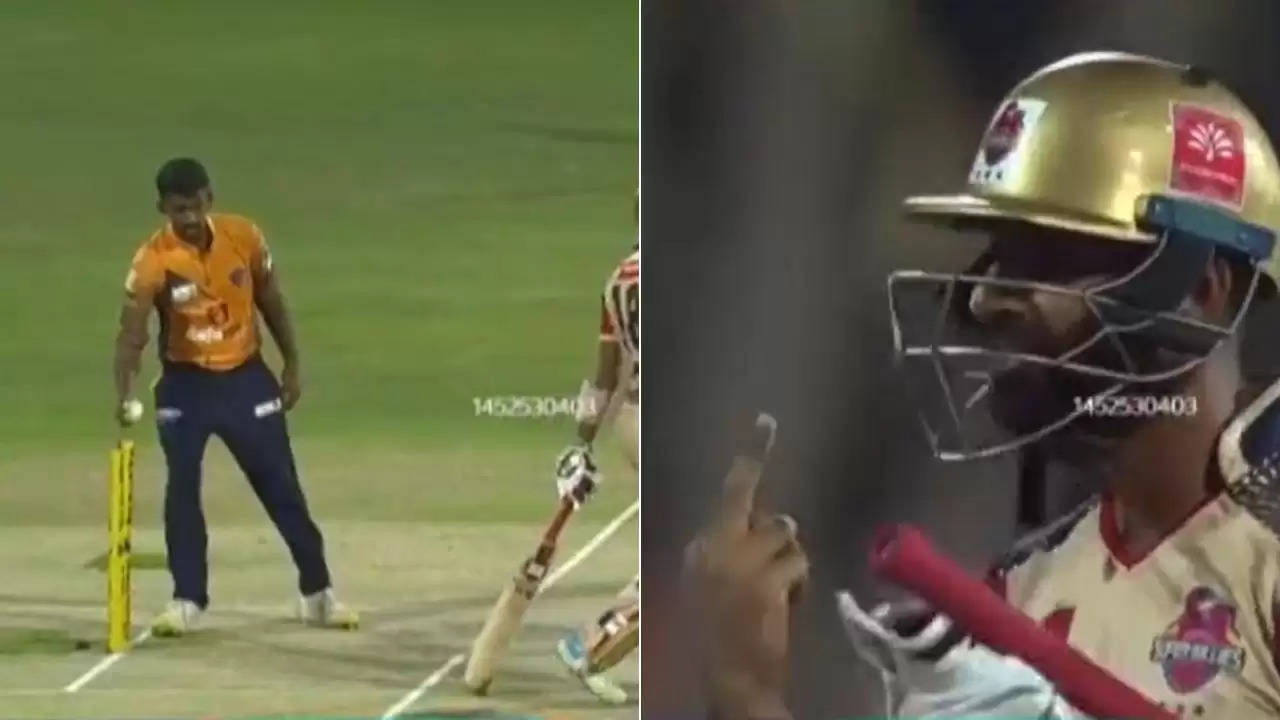 The season of T20 continues as the various states across India organize their own T20 leagues. Tamil Nadu Premier League is perhaps one of the biggest leagues which has come to the fore since last few years. The league has seen some of the top Indian talents from Tamil Nadu ply their trade. The league has also give India talents who have played or could play for the national side. The first match of the season saw Chennai Super Gillies take on Nellai Royal Kings at India cement company grounds.

Chasing 185 to win, the Super Gillies were given a rousing start by Jagadeesan and Kaushik Gandhi. The pair were scoring at nearly 10 runs per over with the score reading 35 for no from 3.4 overs. That’s when Baba Aparjith who was bowling saw Jagadeesan had ventured out of his crease. Jagadeesan was out via the Mankad rule for 25 off 15 balls with 4 fours. The incensed batsman was seen showing the middle finger to the opposition obscenely.

Batting first, Nellai Royals Kings lost Pradosh Paul for 7, while the Baba twins were out for 2 and 3 respectively. NRK were 27 for 3, that’s when opener Suryaprakash was joined by Sanjay Yadav who had just played for Mumbai Indians this year. The pair added 133 runs in 12 overs as both the batters put the CSG bowler to the sword. Suryaprakash was out for 62 off 50 balls with 8 fours. Yadav though stayed strong to finish on 87 off 47 balls with 5 fours and 6 sixes.

Tasked to chase 185 for a win, the controversial loss of Jagadeesan was the talking point of the game. Kaushik Gandhi though kept going even as CSG lost Radhakrishnan for 1. Gandhi and Sasidev added 28 before the latter fell for 15 dismissed by Harish. In walked Sonu Yadav and he was aggressive right from the start as Yadav and Gandhi added 51 runs for the 4th wicket. Sanjay Yadav got rid of the dangerous Sonu Yadav for 34 off 23 balls with 3 sixes. Former IPL star R Satish was out for 5, before CSG lost Gandhi for 64 off 43 balls. The score was reading 156 for 6 with still 29 needed from 12 balls.

Super Gillies needed 29 off 12 balls, that’s when they found a unlikely hero in Harish Kumar. The first ball of 19th over went for a six, and the next was a wide, the equation after a dot ball was 22 off 10 balls. That’s when Kumar struck a four to make it 18 off 9 balls, Trilok Nag bowled 2 wides and a single as the equation became 15 off 8. Trilok struck in the last ball of the 19th over having Siddharth out for a duck. The onus was now on Harish as he faced Davidson in the final over. First ball was a dot, but the 2nd was smacked for a 4 as it was 11 from 4. 3rd ball was a dot ball and pressure was on Harish Kumar, who responded in style with 6 on the 4th ball. the 5th ball was again a dot ball and with CSG needing 5 off 1, that’s when Harish Kumar struck a last ball 4 to make it a tie and into the super over the game went.

Royals Kings win the super over –

The super over saw CSG bat first and the hero of the last overs Harish Kumar take strike. Davidson though had other ideas as he had Harish Kumar out for a duck in the first ball. CSG had scored just 3 from 5 balls but Jagadeesan hit the ball for a six to help CSG reach 9 on the board. Chasing 10 to win, Sandeep Warrier started with a wide, followed by 2 runs and a four. NRK had scored 7 off just 2 balls, Warrier then gave a single and wide to make 9 off 3, off the 4th ball he had Indrajit out for a duck. Ajitesh though made sure NRK breathe easy as he helped them win the super over with a single.

You should better to play GULLY CRICKET rathar than this.

Full scenes in #TNPL. Baba Aparajith runs out Jagadeesan at the non striker's end for backing up too much.

And guess what, Jagadeesan doesn't hold back. Shows him his finger 👀🤯#Cricket #cricketTwitter