Watch! Glenn Maxwell grabs a one handed blinder to send Guptill back to the hut 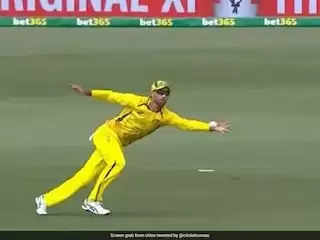 Australian cricket was rocked less than a week ago when they lost an ODI to Zimbabwe after being bowled out for 141. The 2021 T20 world champions are now hosting trans-Tasman rivals New Zealand for a short series. The kiwis have made the short trip to play 3 ODI games. All the 3 matches will be played at the Cazaly’s stadium at Cairns with the next two games to be played on 8th and 11th of September. The first game saw amazing piece of fielding by none other than Glenn Maxwell.

Australia won the toss and put the New Zealand side into bat as Guptill and Devon Conway came to open the innings. The visitors made a sedate start to the innings as both Guptill and Conway were slow to get off the blocks. The moment of the game came when Starc, bowling the 4th ball off the 5th over got a leading edge of Guptill’s bat. Maxwell flung himself to his left and pouched a catch one handed as it was about to hit the turf. The stunning effort was made to look routine as other Aussie converged to congratulate Maxwell at point.

Maxwell does the star turn with the ball –

New Zealand could just manage 232 on the board as Australia showed discipline with the ball. Guptill scored just 6, before Conway and Williamson put together 81 runs for the 2nd wicket. Adam Zampa got the wicket off Conway LBW for 46, and this was followed by the wickets off Williamson for 45 and Daryl Mitchell for 23. While wicket keeper Tom Latham scored 45. Maxwell accounted for the 3 big wickets of Williamson, Mitchell and Latham before dismissing Bracewell for 7. Maxwell finished with, 4 for 52, while Hazlewood picked 3/31 as Starc and Zampa picked a wicket each.

Chasing 233 to win, out of form Australia skipper Aaron Finch was out for 5 when he was out LBW to Boult. The left arm pacer picked the wickets of Steve Smith for 1 and Labuschagne for a duck. Matt Henry then struck twice when he first got rid of Warner for 20, and Stoinis for 5 to leave Australia reeling at 44 for 5.

At the time of writing, Carey was on 85 and Cameron Green on 77 as Australia needed 31 runs from 11 overs with the pair having added 158 runs.