Watch! Glenn Maxwell pulls off an impossible stop to save a certain six 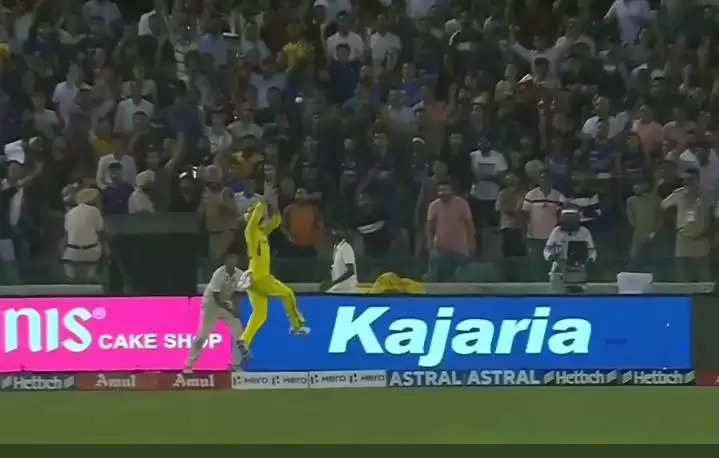 India and Australian fans were excited to watch the two heated rivals face off each other on Tuesday. World Champions Australia, are in India to play a short 3 match T20 series. The first match of the series was played in front of a packed IS Bindra stadium at Mohali. It was the first white ball game in a while in the beautiful stadium at Punjab, as the fans thronged to see their favorite stars in action.

One thing for certain with the Australia team is they give their 100% on the field, be it with the bat or ball. On the field, the Australians have been perennial powerhouses and have been known for their fielding. The 3rd ball of the 19th over, bowled by Nathan Ellis saw Harshal Patel try to hit a huge six. Maxwell though had other plans as he casually stepped over the ropes and still in the air scooped the ball back into play. The batters could only get a single as they felt it had gone for a six.

Just WOW.. Five runs saved by Maxwell. What a athlete he is.. #glennmaxwell #INDvsAUS #Mohali pic.twitter.com/QElYkhUTsf

India lost Rohit Sharma for 11 and Virat Kohli for 2, but a 68 run stand between Surya Kumar Yadav and KL Rahul helped India get back into the game. Rahul scored yet another T20I 50 for India as he was severe on all the bad balls bowled to him. Rahul scored 55 off 35 balls with 4 fours and 3 sixes.

Yadav magic on show at Mohali –

Not to be outdone by the Indian vice captain, Surya Kumar Yadav was at his innovative best. He played some of the most outrageous shots to leave the Australian players in complete shock. Yadav scored 46 before a slower ball by Green had him caught behind by Wade for 46.

Hardik Pandya finishes off in style –

The highlight of the day was none other than lead Indian all rounder, Hardik Pandya. The 28 year old scored 30 ball 71 with 7 fours and 5 sixes to score his 2nd T20 half century for India. This is also his best score in the shortest format of the game for India. Pandya hit Green for 3 back to back sixes off the final over’s last 3 balls to help India reach an imposing 208 on the board.