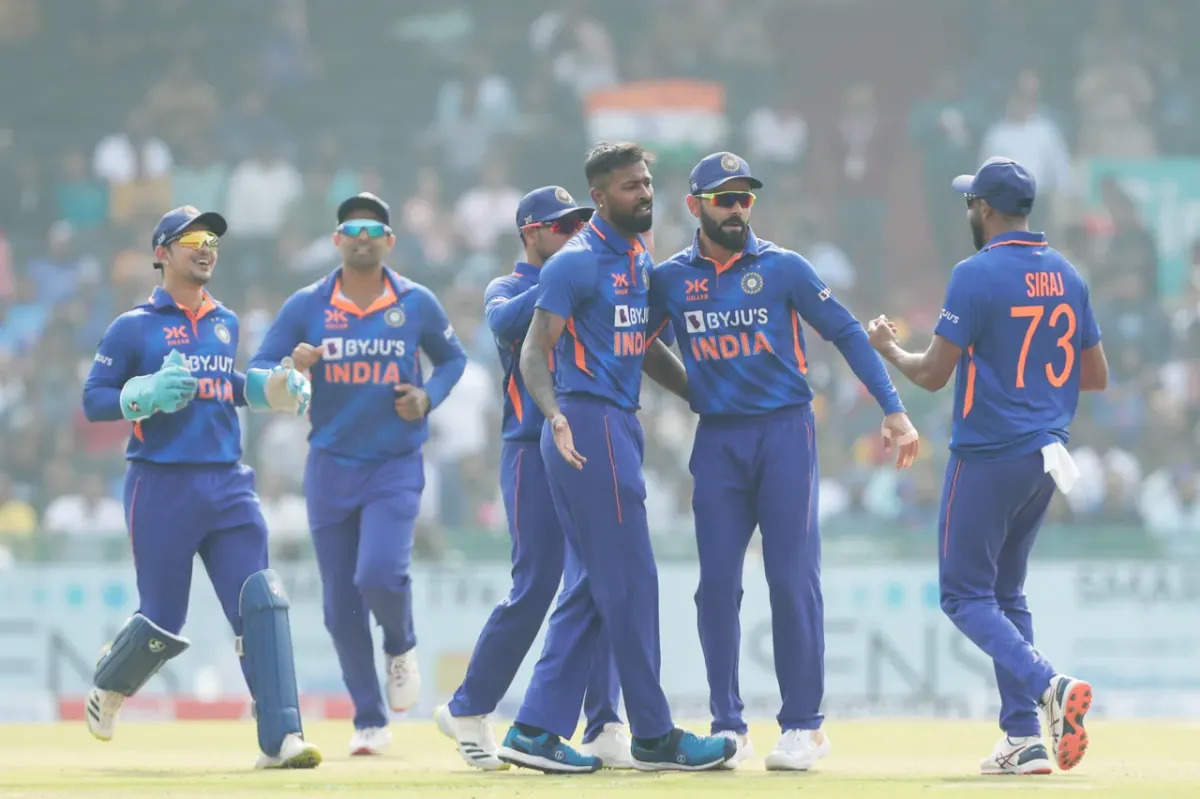 Indian cricket team on Saturday flexed it muscles to win the 2nd ODI against New Zealand. India won the game with 30 overs to spare with 8 wickets in hand as they made light work of the 109 run target set to win by New Zealand. The win for the men in blue meant that, India now has an unassailable 2-0 lead in the series with the final ODI to be played on Tuesday at Indore. This was also yet another home series win for India which extends their unbeaten run.

India won the toss and chose to bowl first on a pitch which had lots to offer for the fast bowlers. This was the first ever ODI to be played at Raipur and the venue became special as it was the 50th Indian venue to host an ODI. Both the teams came into the game unchanged from the 1st game at Hyderabad.

New Zealand were blown away by the early assault from Mohammad Shami and Siraj to be placed at 9/3. Devon Conway was trying to stage a fightback when he played a ball straight back down the ground. Pandya, in his follow through flung himself down to take a brisk catch. Conway couldn’t believe it as he made his way back to the hut for 7.

Rohit Sharma sizzles with the bat –

Chasing 109 to win, It was an easy win for India as they got home in the 1st ball of the 21st over. Indian skipper Rohit Sharma, laid down the marker as he scored 51 off 50 balls with 7 fours and 2 sixes. He was severe on anything short or wide as he cut and pulled his way to his 48th ODI half century.

Henry Shipley did the trick as he had Rohit playing across the line and missing the line of the ball to be out for 51. Kohli who was out cheaply in the 1st ODI was out for 11 yet again failing to make a mark. Santner had the 34 year old when Latham whipped off the bails and stumped the former India captain. Gill and Ishan Kishan then gave the match the finishing touches with Gill not out on 40 off 53 balls with 6 fours, while Kishan scored 8 off 9 balls with 2 fours.

Indian cricket fans took to Twitter to have their say on the return catch taken by Hardik Pandya and you can read all the tweets below.


Top class reflexes from Hardik! 🔥 What a catch!#INDvNZ

A real cold move by Hardik Pandya! Takes a stunning catch and then act like nothing special happened

A real cold move by Hardik Pandya! Takes a stunning catch and then act like nothing special happened

What a brilliant catch by Hardik .. bowling at 140 and catching of your bowling is very difficult... #INDvNZ

That was a real cold move by Hardik Pandya! Take a stunning catch and act like nothing special happened!#INDvNZ #CricketTwitter