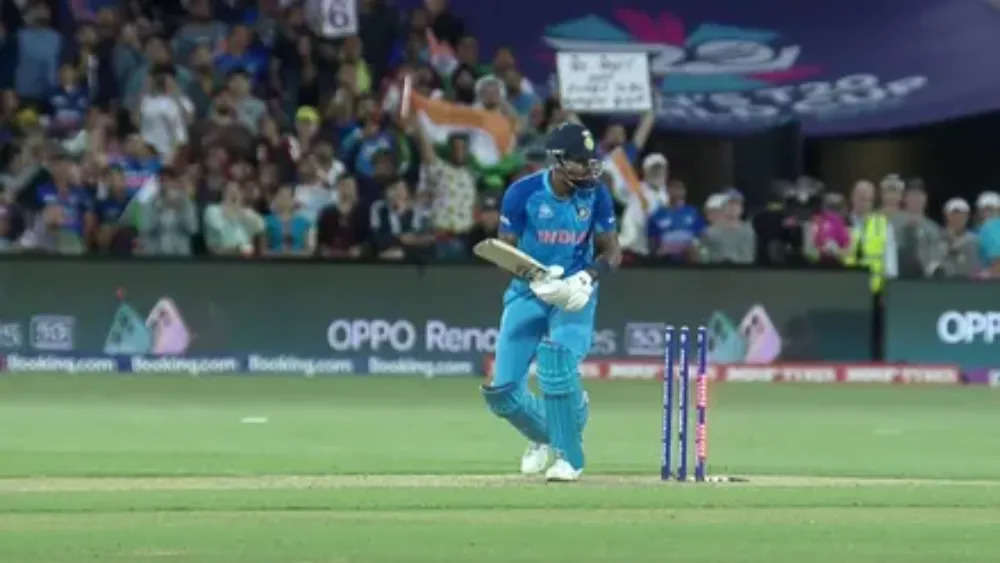 India and England played the 2nd Semi Final on Thursday at the Adelaide Oval. The Indian team were outsmarted as England romped home to a 10 wicket win. It was yet another ouster for the Indian team from the Semi Final stages of the World Cup.

The bowling and the fielding was a huge let down as the Indian team on Thursday. The English opening pair of Jos Buttler and Alex Hales broke no sweat as they chased down the 169 run target by India with ease.

England won the toss and chose to bowl first as they made two changes. Chris Jordan and Phil Salt came in for the injured duo of Dawid Malan and Mark Wood. India went in with the same team that played against Zimbabwe.

Rishabh Pant was given the go ahead of Dinesh Karthik as the veteran wicket keeper batter sat out. The Indian team made a slow start as they were struggling at 75/3 in 12th over when Hardik Pandya walked into bat.

Hardik Pandya played an amazing innings as he scored 33 ball 63 runs innings. He was going after Chris Jordan in the final over of the innings. The last ball saw, Jordan bowl a perfect yorker. Pandya stepped back to play it through the square leg region and the ball went for a four.

Much to the surprise of many they spotted Pandya had hit his own wicket with the bat and his back foot. The Indian all rounder was sad to have seen his wicket being given in such a way as he helped India score a competitive 168 on the board.

Chasing 169 to win, Buttler and Hales made their intentions clear right from the start. Bhuvneshwar Kumar was smacked for 25 runs from 2 overs as England kept their scoring rate of 10 runs per over intact.

The Indian fielding too had a miserable time as dropped catches and missed stumpings cost them dear. The English romped home to a 10 wicket win as Buttler hit Shami for a 6 to seal the deal. Buttler was not out 80, while Hales scored 86 as none of the Indian bowlers seemed to have a clue to stop the run riot.

the wicket of Hardik Pandya had the Indian fans taking to Twitter and you can read all the tweets below.

168 is a lot more than it looked like India would get early on. But thanks to Hardik Pandya, it’s game on! An important PP coming up in the England innings. Also, how crucial will Hardik’s ‘hit wicket’ off the last ball be!? #T20WorldCup #INDvENG #INDvsENG 🇮🇳🏴󠁧󠁢󠁥󠁮󠁧󠁿🏏 pic.twitter.com/jNJYqd3aad