Watch! Hardik Pandya give Liam Livingstone a send off after dismissing him 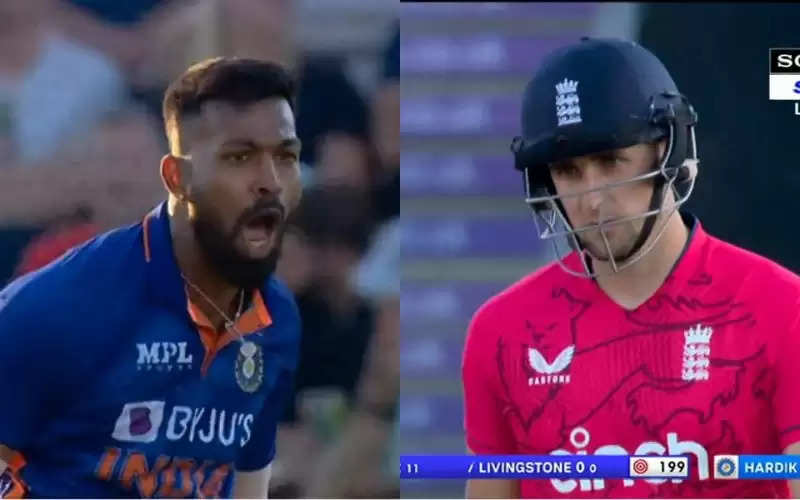 Cricket fans are excited to see their favourite Men In Blue take on the English team in two back to back this weekend. Both the T20 matches will be played in mid-lands as Edgbaston and Nottingham hosts the games on Saturday and Sunday respectively. India played near perfect cricket on Thursday at Southampton to win the game by 50 runs. The match will be remembered for Hardik Pandya and his all round efforts with the bat and ball. while everyone were busy with Pandya’s exploits, there was one incident which went unnoticed.

Hardik Pandya’s send off to Livingstone –

Rohit Sharma handed the ball to Hardik Pandya in the 6th over of the innings as the English team had made a slow start. In the 2nd ball he got the big wicket of Dawid Malan who was looking dangerous with the bat. In walked Liam Livingstone wearing a helmet camera. The first ball was a dot, the 2nd ball he faced and the 4th ball of the over saw, Livingstone try something cute. The batsman went for a lap shot only for him to get the edge on his bat and caught behind by Dinesh Karthik. Pandya was seen giving the batsman a huge send off.

Two wickets in one over for Hardik Pandya - that agression from him. pic.twitter.com/GDZhq73kSx

Hardik’ day out with the bat –

Hardik Pandya is the man of the moment, as he has re-discovered his form with the bat and ball. The 28 year old scored his first half century in T20 cricket for India during the game on Thursday at Southampton. He eclipsed his previous best of 46 which came a few weeks ago against South Africa. Pandya got his maiden 50 off mere 30 balls before falling for 51 runs.

Pandya wrecks havoc with the ball and creates history –

The day for Hardik Pandya wasn’t over, as he was called upon to bowl the 6th overt where he picked the wickets of Malan and Livingstone. Pandya the got rid of the struggling English opener Jason Roy the next over. Pandya took one more wicket to finish with 4/33. Pandya was clocked at 1461. KPH which is the quickest he bowled in international cricket. The 28 year old also became the 1st Indian to score a 50 and pick 4 wickets in the same game of T20 international.