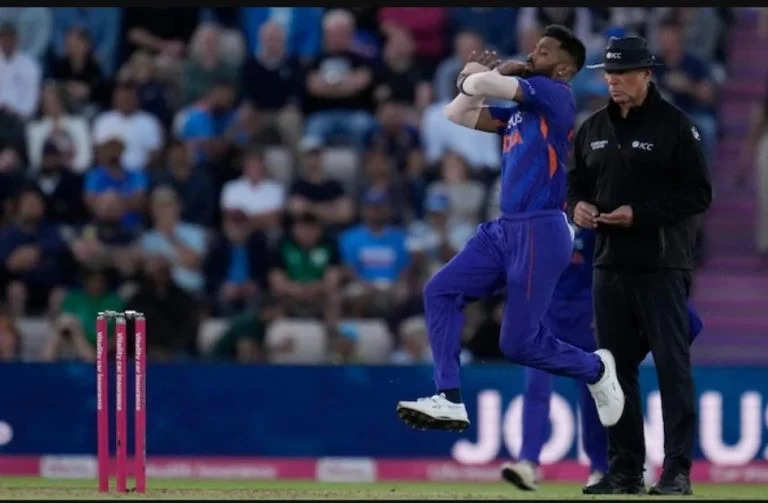 Indian team on Saturday beat the English team by 49 runs to take an unassailable 2-0 lead in the 3 game series. The game at Edgbaston saw the Indian team led by Rohit Sharma outclass the Jos Buttler led side. This was India’s 4th successive series win against England in this format of the game. It was also India’s 2nd successive win in England after their 2018 win. The men in blue were efficient with the bat and amazing with the ball as every player pulled up their socks.

Hardik Pandya began the series with an amazing half century and 4 wicket haul to become the 1st Indian to do so. On Saturday he scored a mere 12 with the bat before being caught off a short ball by Malan off Jordan. with the ball Pandya picked the wicket of Moeen Ali for 35. It was during a break for change of ends that the stump mic picked Pandya saying “Mere time mere pe dekh, maa ch***ne gaya wo kya bol raha hai’

Indian bowlers come to the fore –

Having set 171 to win, Bhuvneshwar Kumar did the early damage for the English team. the 32 year old got Roy out 1st ball, and had Buttler caught behind next over for 4. Bumrah got the wicket of dangerous Livingstone for 15, before Chahal got the wickets of Harry Brook and Dawid Malan. There was a small partnership between Ali and Willey post the fall of Sam Curran. Pandya though sent back Ali and next ball Jordan was run out. Harshal Patel took out the leg stump of Mathhew Parkinson to give Indian team the win and the series was wrapped up.

The game on Sunday will give India another chance to test Kohli out as he scored just a single run. The match could also witness the likes of Umran Malik, Arshdeep Singh and other bench warmers who still haven’t got a chance to play this series.