Watch! Hardik Pandya shares an inspiring clip of his comeback from injury on Instagram 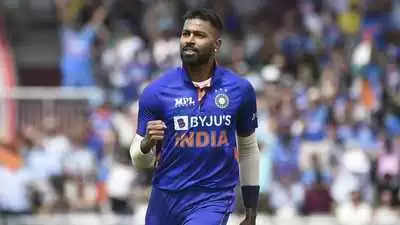 Indian cricket has always wanted an all rounder post the retirement of one Kapil Dev in 1994. The hunt seemed to have ended when in 2003 a curly haired left arm seamer named Irfan Pathan made his debut. Pathan could not only swing the ball and get wickets, but could also score runs with ease. Irfan Pathan though saw his career cut short due to injury and losing his pace by the time he wasn’t even 28. In 2015 Mumbai Indians gave the Indian fans, team and the world the first look at Hardik Pandya.

Hardik Pandya made his IPL debut for Mumbai Indians in 2015 when the strong IPL talent spotters of Mumbai laid their eyes on the wiry lad from Baroda. He made an immediate impression as he played his role for Mumbai in their 2nd ever title win in 2015. 3 more IPL Titles followed in 2017, 2019 and 2020. In 2016 he made his T20 and ODI debut for India followed by the 2017 test debut in Sri Lanka.

Injury controversies off the field and eventual drop –

Hardik Pandya was on cloud nine as he had cemented a place for himself in the Indian squad as an all rounder. Tragedy struck when he got injured during the 2018 Asia Cup while bowling in the game against Pakistan. Early 2019, he was in trouble for his comments during a chat show. He played in the 2019 World Cup but he couldn’t make a positive influence. After some decent performances during the T20 and ODI leg of Australia, 2021 was a disaster as Pandya lost his form and his place from the Indian team. More trouble came when he was released by Mumbai Indians post the IPL 2021 season.

Hardik Pandya’s comeback to mainstream cricket and his performances have been riddled with personal battles. Pandya recently took to Instagram to show his journey back to the game after injuries. He shared a short video clip which began with his family and his initial days. It then moves down to 2019 where he could be seen hobbling and taking support to walk in the hospital. The video shows glimpses of his comeback and the people who played a role in it. Pandya captioned the video and wrote “through the ups and downs, with my people by my side. Woke up every morning raring to go with the will to become stronger. With the will to become fitter and play for my country. Always greatful to those who stood by me, who encouraged me and guided me”

Post the release from Mumbai Indians, Pandya was snapped by new team Gujarat Titans for the TATA IPL 2022 season. Pandya surprised everyone with the bat as he pushed himself upto 4 and scored over 480 runs during the season. further surprises were in store as he started to bowl at full tilt while clocking over 140 KPH on many occasions. The season ended on a high as Pandya the captain led his side to an IPL win in its first ever season.

Pandya’s impressive spell during the IPL and improved fitness saw him make a comeback to the men in blue side. Pandya was part of the team which played the 4 games against South Africa post the IPL. He was made the vice captain after Pant was elevated to captaincy post KL Rahul’s fitness issues. The tour of Ireland saw Pandya captain India for the first time and led the side to a 2-0 series win.

Creating records with the bat and ball –

Hardik Pandya was in amazing form during the recent while ball tour of England during the T20 and ODI series. Pandya began the T20 series with a 50 and 4 wicket haul during the Southampton T20, as he became the 1st Indian to achieve this feat. During the final ODI at Manchester, Pandya picked big wickets. The 28 year old snapped the wickets of Roy and Ben Stokes and later Livingstone and Buttler in a single over. With the bat he came in when India were 72 for 4 and struck an impressive 71, while adding 133 for the 5th wicket with Pant. In the process, Pandya became the 5th Indian to score a 50 and pick 4 or more wickets in the same ODI.

India will want a fit Pandya as there is a huge world cup ahead later this year, if this form is kept up, may be an unlikely call to the test team could be in the offing.