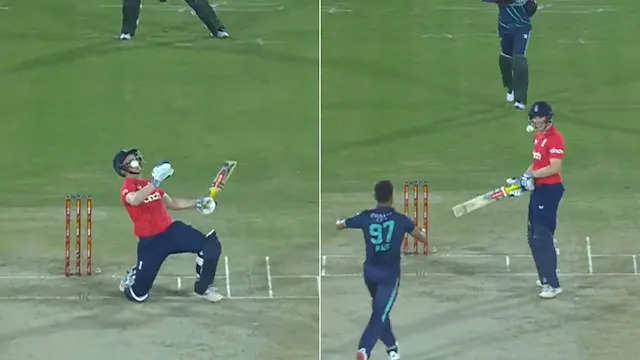 England and Pakistan are locked in a huge battle ahead of the T20 World Cup 2022. The 2010 champions are taking on the 2009 champions in a 7 match series, with the first few games being played at Karachi. England won the first game before Pakistan stormed back to win the 2nd. Babar Azam scored his 2nd T20 100 to propel the home team to a 10 wicket win chasing 200.

After the massive loss on Thursday, the 3rd game saw little turn around time as it was being played just a day after the 2nd game. Pakistan won the toss and chose to bowl first yet again. Will Jacks was given a debut cap as Alex Hales was rested for the game.

Harry Brooks gets a nasty delivery from Haris Rauf –

Harry Brooks is often being called an upcoming talent for England team and he proved people right on Friday. The incident happened in the 4th ball of the 16th over, with Haris Rauf bowling a short ball. Brooks went for a pull, and the ball got stuck right on the grill of the batter. Rauf and Rizwan were quick to run to Brooks and ask about his well being, before the batsman was hugged by Rauf.

"Caught in the grille"

Brook gets a hug from Rauf after the sharp bouncer 🤝#PAKvENG | #UKSePK pic.twitter.com/UZRljMQt9C

Will Jacks makes a memorable debut –

Put into bat, Jacks in his debut game, opened the batting with Phil Salt. It was Mohammad Hasnain though who had the first wicket of the game, when he had Salt out for 8 caught by Nawaz.

Despite the early fall of Salt, debutant Jacks kept the scoring rate up with his batting. Jacks added 43 runs with Malan for the 2nd wicket before the left hander fell to Qadir for 14. Usman Qadir struck again when he had Jacks out for 40 off 22 balls when he holed out to Mohammad Nawaz to leave England at 82 for 3.

Ben Duckett making his English after a long time added 139 unbroken run stand with Harry Brooks for the 4th wicket. Both the batters scored their maiden T20 half centuries. Brooks was not out on 81 off 35 balls with 8 fours and 5 sixes, while Duckett scored 70 off 42 with 8 fours and a six. This helped England reach a massive 221 on the board.

Being asked to chase 222, the English bowlers had Pakistan at 28 for 4 in the 6th over. Mark Wood got the wicket of Azam for 8, while Rizwan was out to Topley for 8 off 14 balls. Mark Wood then had Haider Ali for 3 caught by Adil Rashid before Sam Curran got the wicket of Iftikhar Ahmed.

Playing his 2nd ever T20I, Shan Masood was not out on 66 off 40 balls with 3 fours and 4 sixes. He was given support by Khushdil Shah with 29 and Mohammad Nawaz who scored 19. The target of 222 though was way too imposing and Pakistan ended at 158 for 8 to lose by 63 runs. The win gave England a 2-1 lead in the series with 4 more games to go.