Watch! Hasan Ali breaks into dance during day 1 of the opening test vs SL 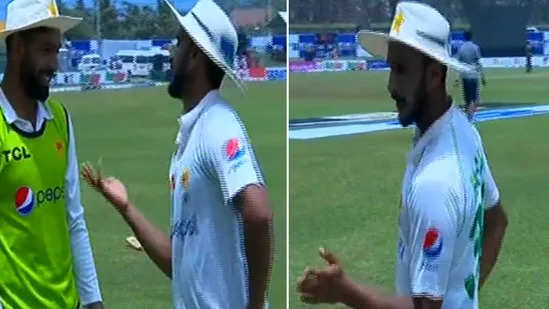 International cricket is coming thick and fast like the luggage in a airport conveyor belt as Pakistan are touring Sri Lanka. The first test of the 2 match test series is being played at Galle where Sri Lanka played their last two games in the previous series against Australia. The first test at Galle, saw the home team win the toss and elect to bat first. It is an important series for both the teams as both are close to each other on the WTC points table. Pakistan lost their last test series at home to Australia, while the home team are coming on the back of 1-1 drawn series against Australia.

Bowling first, Pakistan seemed in the groove as their opening bowler Shaheen Afridi was making life tough for the Sri Lankan batters. The moment of the day came when Hasan Ali was seen breaking into a dance at the sidelines. The right arm pacer who is known for his hilarious antics, was having drinks supplied by a substitute fielder outside the boundary. The commentators were left amused when they saw Hasan Ali break into a dance routine.

Sri Lanka lose half their side for 99 -

Sri Lanka won the toss and chose to bat first at Galle, where chasing runs in the 4th innings becomes tough. Shaheen Afridi got the first wicket when he went through the defence of skipper Karunaratne for 1. Kusal Mendis and Oshada Fernando then went after the Pakistani bowling attack and were scoring at nearly 4 runs per over. The final ball of the 15th over saw Mendis caught behind off Yasir Shah off Rizwan for 21. Next over Hasan Ali got Fernando nick one behind to get rid off him for 35. Mathews was the next to for a duck caught by Naseem Shah off Yasir to make it 68 for 4. De Silva was the 5th man to go when he chopped one back onto his stumps for 14 to have SL at 99 for 5.

Just 5 days after playing a career defining knock of 206 not out at the same ground against Australia, Chandimal was in his elements again. The 32 year old scored 76 off 115 balls with 10 fours and a six while the rest of batsmen struggled. DIckwella was out for 4 to become Afridi's 3 wicket, while Ramesh Mendis stuck around to score 41 ball 11 as he was dismissed by Naseem Shah to give Rizwan his 3rd catch. Prabath Jayasuriya was trapped LBW by Nawaz to reduce SL to 133 for 8. Thats when Chandimal and added quickfire 44 run stand before Chandimal fell to Hasan ALi caught by Yasir Shah. Theekshana playing his 2nd test scored 38 off 65 balls and added 45 runs for the last wicket with Rajitha to take SL to 222. Afridi picked 4 wickets, while Yasir Shah and Hasan Ali picked 2 each. Nawaz and Naseem Shah picked a wicket each.

Pakistan openers Imam Ul Haq and Shafique made a slow and watchful start and added 12 for the first wicket. Imam was the first to go when he was trapped LBW to Rajitha for 2 off 16 balls. Fresh off his 12 wicket haul debut against Australia, Jayasuriya got his 13th wicket when he trapped Shafique out for 13 off 47 balls to have Pakistan at 21 for 2. Azhar ALi on 3 and Babar Azam on 1 saw the rest of the day off as Pakistan ended on 24 for 2 with still a trail of 198 runs with 4 more days to go.