Watch! Indian Journalist recall Sanju Samson's generous offer to him ahead of the first T20 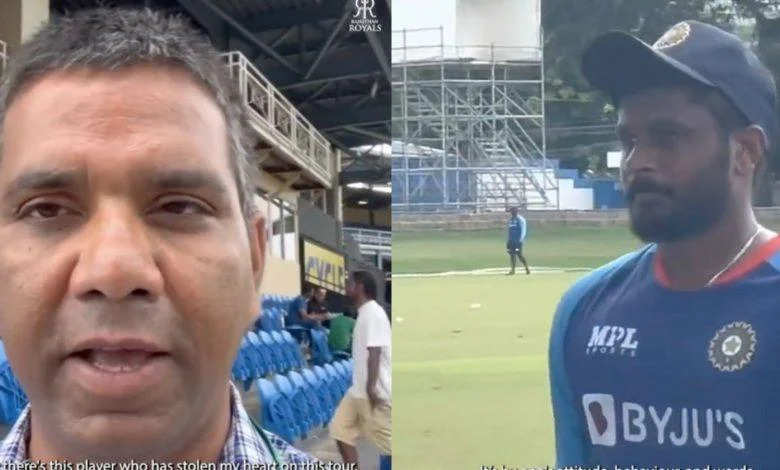 Sanju Samson is finally getting the due he deserves, after making his Debut in 2015 on the tour of Zimbabwe, samson had to wait nearly 5 years to make a comeback. Even before he could make his international debut, he was enjoying a lot of fandom amongst the fans and many cricket experts. Samson had won many over with his amazing timing with the bat and every year in the IPL he plays an innings which blew the mind of the fans away. Samson made a comeback later in 2020, and has been playing international cricket at regular intervals. During the 3 match ODI series against West Indies he made a name for himself not only as a batsman but also a wicket keeper. Samson scored his first ODI half century in the second game to help India win the match and the series.

Noted Journalist, Vimal Kumar has been in the news for bringing everything that is happening during India's tour of West Indies. The journalist has been in the news for uploading everything that is happening around the Indian team on his YouTube channel. The journalist told a story that happened with Sanju Samson. The story goes that Vimal Kumar had told the 27 year old Samson about the distance the Brian Lara Cricket ground was from the Queens Park Oval stadium where India played all the 3 ODI games. Samson said to Kumar that he could travel with the team. Kumar later touched by the offer said to Samson he couldnt do it as it would be a protocol breach, as the players werent allowed to travel with journalists.

Samson part of the team for Zimbabwe tour -

Sanju Samson played a key role by saving a key boundary in the last over of the 1st ODI. In the second game he scored his first ever 50 for India in ODI cricket and played a huge role in the win. Samson was initially supposed to fly back to India, but KL Rahul's health issues meant that, Samson was asked to stay back for 5 match T20 series against West Indies. Samson now has been named in the squad which is to tour Zimbabwe for a 3 match ODI series with Shikhar Dhawan as a the captain. Deepak Chahar and Washington Sundar have made a comeback, while Rahul Tripthi gets a maiden ODI call up to the Indian squad