Watch! Indian cricketers practice power hitting in the nets ahead of the 1st T20 vs NZ 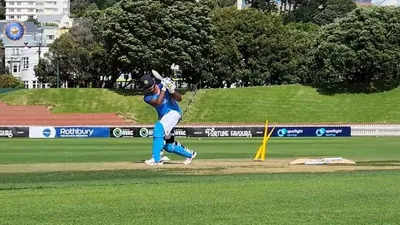 India and New Zealand are set to face each other in a 3 match T20 series which begins on Friday. The first match will be played at the SKY stadium at Wellington as the next two matches will be played on Sunday and Tuesday.

Indian team will be without the services of its top 3 in KL Rahul, regular skipper Rohit Sharma and number 3 batter Virat Kohli. The team will be captained by Hardik Pandya and the coach of the side is former middle order batting legend VVS Laxman.

The Story so far –

India on the other hand lost to eventual champions England, a day later at Adelaide. The Indian team saw the English openers make light work of the 168 run score posted on the board. England, won the game by 10 wickets with 4 overs to spare to reach the finals and win the title for the 2nd time.

Indian team flexes its muscles in the nets –

The official twitter handle of BCCI posted 46 second video of its players batting in the nets as well as in the middle. The clip began with the likes of Ishan Kishan and Rishabh Pant in the nets.

All charged up for the #NZvIND T20I series opener#TeamIndia 🇮🇳 pic.twitter.com/AsNSTeMqq8

The video then showed stand in skipper Hardik Pandya and Shreyas Iyer hit a few lusty hits. The moment of the video came when Sanju Samson hit a few sixes during the practice in the middle. What it made it even more special was the fact that Samson hit those sixes without even looking where the ball went to elicit joyous reactions.

The likes of Sanju Samson, Ishan Kishan, Rishabh Pant, Shreyas Iyer and Umran Malik will be under the watch. This is a good chance for the youngsters to make a name and stake a claim for themselves to become permanent fixtures in the T20I format for India.

There has been widespread calls for India to overhaul its team after the semi final debacle against England during the 2022 T20 World Cup, as many are suggesting Hardik Pandya to take over the reins of T20I captaincy on a full time basis.