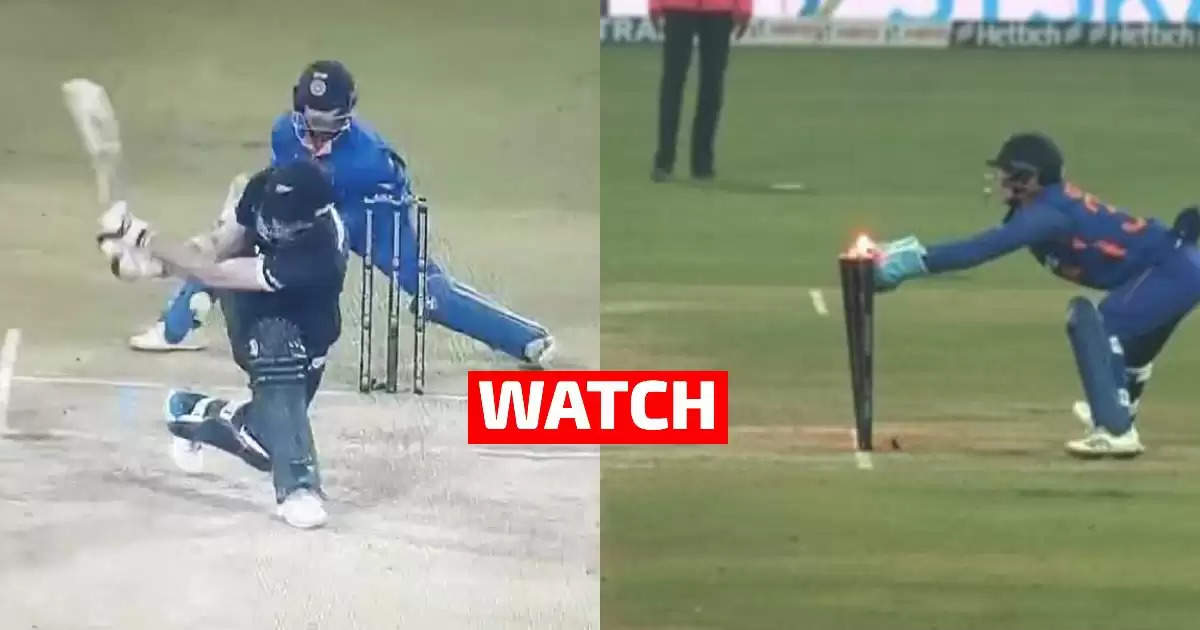 India on Tuesday kept its proud home record by winning yet another series, this time against New Zealand. The Indian team completed a 2nd successive whitewash by winning the series 3-0. India had just a few days ago beaten Sri Lanka by the same margin. The win enabled India to rise up to the top of the ODI rankings and become number 1 in the table. Rohit Sharma and his men beat New Zealand by 90 runs in a high scoring match which saw over 650 runs scored at Indore.

Ishan Kishan pulls of a quick stumping like MS Dhoni –

Chasing 386 to win, New Zealand were 268/6 with Michael Bracewell and Mitchell Santner at the crease. These were the two players who nearly got the kiwis over the line during the 1st ODI at Hyderabad.

Bracewell charged down the wicket to smash Kuldeep for a six. The wily left arm wrist spinner bowled one down the leg side as Ishan Kishan pulled off a stumping that would have MS Dhoni proud. Despite being blinded by the batter, Kishan’s effort meant that India got the big wicket of Bracewell for 26.

Indian openers score twin tons to give a good start –

Rohit Sharma scored his 30th ODI ton to go level with Ricky Ponting and break his three year wait for a ton. Rohit scored 101 off 85 balls with 9 fours and 6 sixes in his knock before he was bowled by Bracewell. Gill who began with a double ton in the 1st ODI scored his 4th ODI ton. Gill was out for 112 off 78 balls with 13 fours and 5 sixes caught by Conway off Tickner.

Indian middle order gets out in search of quick runs –

Virat Kohli and Ishan Kishan added 38 for the 3rd wicket before a mis-understanding had Kishan run out for 17. Kohli then fell for 36 caught by Allen off Duffy and was soon followed by Surya Kumar Yadav for 14 when he holed out to Conway to give Duffy his 2nd wicket.

Pandya and Thakur ensure a strong finish for India –

Chasing 386 to win, Devon Conway stood up to the Indian bowlers to scored 138 off 100 balls with 12 fours and 8 sixes. Despite losing his partners at the other end the left handed opener kept the score board ticking with timely hits to the fence. He was supported well by Henry Nicholls who scored 42 but the big stand was never taking shape as India took wickets at regular intervals.

At 184/2, Daryl Mitchell and Conway were looking to challenge the Indians. The introduction of Shardul Thakur changed the game. The 31 year old first got rid of Mitchell for 24 caught behind off a short ball. Next Ball it was Tom Latham who sliced a catch to Pandya off a leading edge off the toe end of the bat to fall for a 1st ball duck.

Thakur then got his 3rd when he had Glenn Phillips caught by Virat Kohli for 5 to turn the match towards the hosts. Kuldeep Yadav now reunited with Chahal picked 3 wickets to leave the Kiwis helpless. Yadav got the wickets of Henry Nicholls first before taking out Bracewell and Ferguson. Chahal picked 2 wickets, while Pandya and Umran picked a wicket each.