Watch! Ishan Kishan cheekily has a banter with Tom Latham with this funny appeal 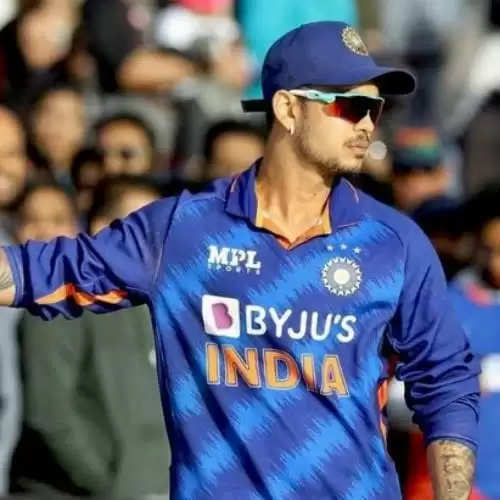 India showed their dominant side with the bat yet again as they got off to an amazing start versus New Zealand. The home team thanks to a maiden ODI double ton by Shubman Gill scored 349 during the 1st ODI which was played at the Rajiv Gandhi stadium at Hyderabad. This was the first of 3 ODI games during the Kiwis short tour of India which also contains 3 T20 games.

India batted first after winning the toss and saw a packed house at Hyderabad enjoy every moment of the Indian’s batting. There was a huge controversy when Hardik Pandya was given out controversially. This happened, despite it looking like the gloves of Tom Latham had disturbed the bails. The Indian fans weren’t happy as they had a go after the decision was given.

Ishan Kishan cheekily tries to pay back to Tom Latham –

Tom Latham and Kiwis also appealed against Shubman Gill for Hit wicket as the bails had fallen. It then came to light that, Latham had dislodged the bails with his gloves. Ishan Kishan who came into the team to replace KL Rahul got one back for India. Kuldeep Yadav was bowling to Latham as the kiwi went back to play the ball and there was huge appeal. The 3rd umpire was called for as it was then seen that Ishan Kishan had dislodged the bails with his gloves and had a huge laugh about it.

Ishan Kishan is hilarious for this 😭 pic.twitter.com/qEgeWOQ8m3

23 year old Shubman Gill scored an amazing 208 runs off 149 balls with 19 fours and 9 sixes in his knock. The fact that the next best scorer was 34 by Rohit Sharma showed the dominance by the youngster. India reach 349/7 with gill falling in the 2nd ball of the final over of the innings. The 23 year old got to his double ton with 3 back to back sixes and become the 5th Indian player to score an double century.