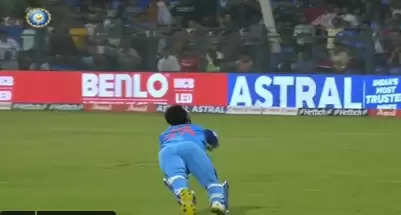 India and Sri Lanka kicked off the new year with the start of the T20 series at the Wankhede Stadium in Mumbai. The defending Asia Cup champions are in India to play a short 3 match T20 and ODI series.

India are coming into the series with some of the big names like Virat Kohli and Rohit Sharma not part of the series. Hardik Pandya the former Mumbai Indians boy was leading India for the 1st time in India after captaining the side away from home last year.

Chasing 163 to win, Sri Lankan batters were pegged back in regular intervals due to the wickets taken by the Indian seamers. Umran Malik was breathing fire as he was clocking over 145 KPH.

One such ball was the downfall for Asalanka who went for a pull shot only to see Ishan Kishan make his way to the ball. The 24 year old was keeping wickets instead of Samson and he settled under the ball well to dive full length to get rid of Asalanka for 12.

Pathum Nissanka became Mavi’s 1st wicket when he was bowled neck and crop for 1 to a ball coming in. The next wicket to fall was Dhananjaya De Silva who fell for 8, while trying to chip Mavi only to be caught by Samson.