Watch! Jos Buttler with the most ridiculous six ever hit in the game of cricket 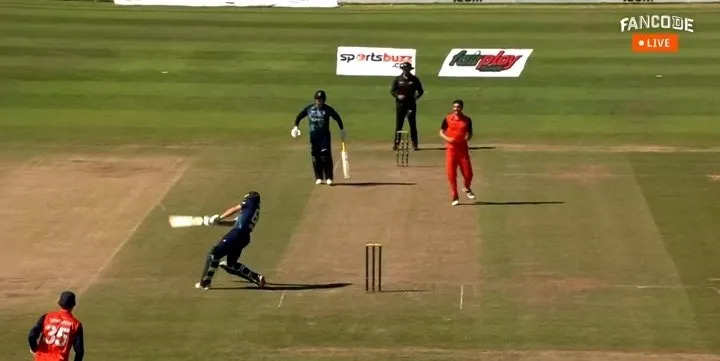 Jos Buttler over the last 3 months has shown amazing form and consistency with the bat. It started with his 800 plus run reason for Rajasthan Royals, during the TATA IPL 2022 season. Buttler’s run scoring spree saw RR reach the final before losing to Gujarat. Buttler, who was dropped from the test side was showing his devastating form with the bat during the recent ODI series against Netherlands. On Wednesday, the final ODI saw the best of Buttler as he put the Dutch team under the sword yet again with his batting.

Buttler’s got no chill –

Jos Buttler was the captain of the England side, in place of Eoin Morgan who had taken a break amidst lull in form. The incident happened in the 29th over of the innings, with Buttler batting on 65. Van Meekeren the bowler happened to bowl the ball which landed outside the pitch and bounced thrice. The umpire called it a no-ball but Buttler was in no mood to let go of this chance. He swatted the ball away for a huge six going outside the pitch.

Netherlands batted first, and lost Vikramjit Singh for 6 caught by Malan off Willey. Max ODowd and Tom Cooper then added 72 for the 2nd wicket. Cooper was out for 33 when he fell to Carse. Livingstone then sprung into action sending back ODowd for 50 caught behind by Buttler. Bas De Leede with 55 and Edwards with 64 then helped the home side reach a decent 244 runs on the board.

Jason Roy who found form last game scored his 10th ODI century for England, Roy and Salt 85 for the first wicket from just 9.4 overs. Salt was out for 49 from just 30 balls getting bowled by Van Meekeren. 2 balls later David Malan was out for a duck to the same bowler. From there it all went downhill as Buttler with 86 off 64 balls with 7 fours and 5 sixes and Roy 101 not out with 15 fours helped England win the game in just the 31st over.