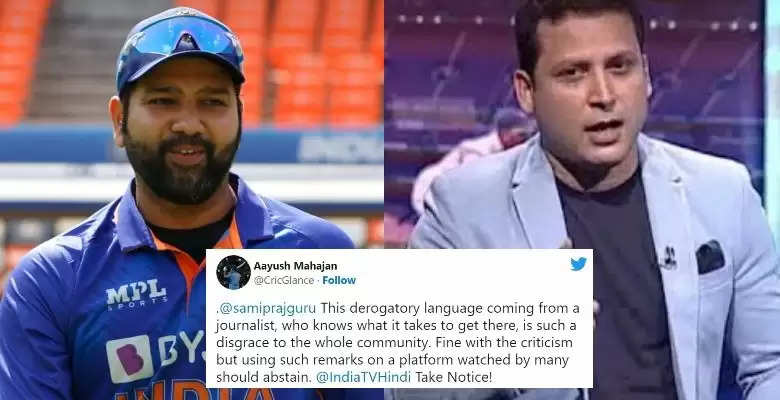 Rohit Sharma on June 23rd marks his 15th year in international cricket. The 35 year old from Mumbai endured a rough stop start to his career. Once he began opening the innings, he became one of the best white ball players in the country. Since 2019, he has taken his game to a new level by becoming a opener in test cricket as well. In 2022, Rohit has now been given the captaincy of the Indian team across all formats. Rohit’s first big challenge will be the rescheduled 5th test against England, starting 1st July.

Rohit Sharma along with Virat Kohli had taken a break post the IPL after long cricket season. Indian captain was rested for the five match T20 series against South Africa. India was originally supposed to be led by KL Rahul, but an injury to the 30 year old meant, Rishabh Pant was given the captaincy. Journalist Samip was asked a question by a fan when he went into a 45 second rant. The journalist said “Where is your Rohit Sharma? Vacationing. If he a cricketer then he should play cricket but he’s vacationing. He’s a Bhagoda (fugitive), not willing to play cricket. Rohit didn’t want to face [Kagiso] Rabada; if he’s brave then should come and play. Rest for what? Which injury?” 20 days of rest? Rohit Sharma opted out of the India series [vs South Africa].He isn’t able to bat. He isn’t able to move quicker; has grown so much fat on his belly. But he’s a superstar!”

Rohit Sharma had a bad season in the IPL as a captain and as a batsman. He did not score a single fifty while scoring just over 280 runs with the bat. Rohit showed glimpses of form, but couldn’t make a big score with the bat. Mumbai Indians too had their worst season when they finished 10th in the table, which is their lowest in the history of IPL. The five time champs won just 4 games as they finished just below CSK at 9th with similar points but missed out of the 9th place on account of run rate.

Cricket fans were angry on Twitter as the journalist insulted the Indian cricket captain live on TV. You can read all the tweets below.