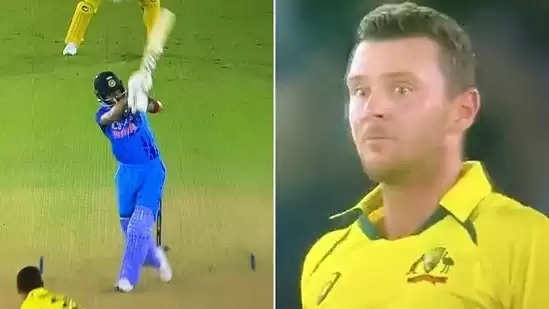 India and Australia are taking on each other in the first of 3 T20 matches that are to be played between the two nations. The first match of the series is being played at the IS Bindra Stadium at Mohali. Australia won the toss and chose to field first to make use of the dew later in the day. India had a few surprises as Bumrah missed out and Umesh Yadav was drafted into the XI. Rishabh Pant too was made to sit on the bench as Dinesh Karthik was the front-line wicket keeper.

India opened the innings with KL Rahul and Rohit Sharma. The first few balls of the innings were played cautiously by the Indian team. The match saw one of its earliest moments when KL Rahul was in his groove. The first ball of 3rd over by Hazlewood, saw KL Rahul stylishly flick him over the leg side boundary for a huge six. This shot had the fans and commentators in awe.

Rohit and Virat fail to shine –

Indian captain Rohit Sharma, began with an aggressive intent with a six and a four. He tried to keep the aggression going with yet another big shot. Rohit though could only find the waiting hands of Nathan Ellis to give Hazlewood and Australia its 1st wicket. Nathan Ellis then struck with the ball when he had Kohli out for 2 caught by Cameron Green.

KL Rahul under the pump –

30 year old KL Rahul has been under the microscope for his slow start to the innings in recent times. The stylish opener from Karnataka had said he was working on bettering his run scoring at the start of the innings. The start against Australia, was a glimpse of what he could do with the bat.

The amazing six by KL Rahul had the fans on their feet as the Indian cricket fanatics took to twitter to voice their opinion. You can read all the tweets below.

So, you see, KL Rahul doesn't have to worry about, or think of, strike rates. He frees his mind and the strike rate is the natural outcome.

Reaction from Rohit Sharma after the shot from KL Rahul. pic.twitter.com/CHS3EilDy7