Watch! Kagiso Rabada and Pant get tangled mid-pitch as the twitteratti sees red 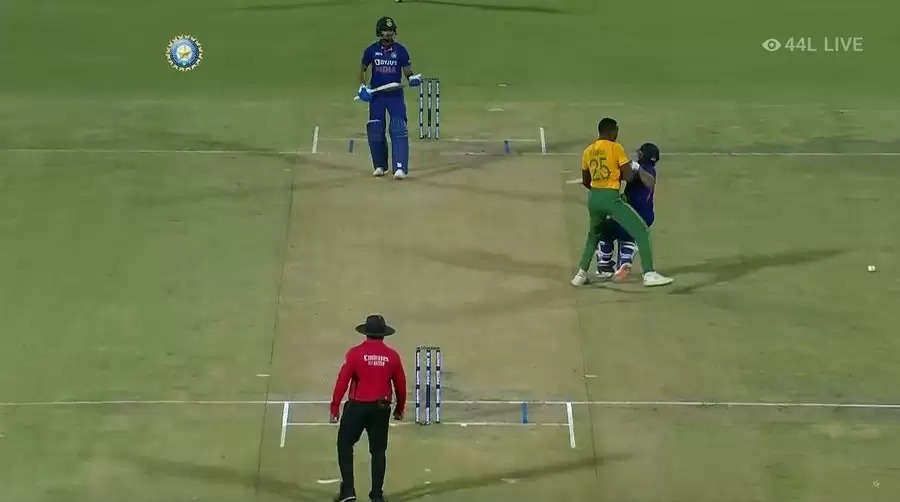 India and South Africa kicked off their 5 match T20 series with the first match on Thursday. The match was played at the Arun Jaitley Stadium at New Delhi as a huge crowd thronged to see the game. India were put into bat by the visiting team as Rishabh Pant led the Indian team. The 24-year-old was given the task of leading the side after KL Rahul was ruled out of the series due to groin injury. It wasn’t a great start to his captaincy career as India lost the game and also its winning streak.

Ishan Kishan gave India a blistering start by scoring 76 runs off mere 48 balls. The youngster’s fall saw the newest India captain Pant walk to the wicket. The incident happened during the 1st ball of the 14th over which was bowled by Rabada to Iyer. Iyer got a short rising ball which he fended off to mid-wicket. Pant tried to steal a single and Rabada too was going for the ball. That’s when the two former Delhi team mates collided with each other. The comedy was that Stubbs who made his debut instead of under-arming the ball to Maharaj went for a full blooded throw. The left arm spinner was in shock as he managed to avert an injury.

Chasing 212 to win, the visitors won the game on a canter, with Miller and Van Der Dussen scoring the runs. India who were on a 12 game winning streak saw the two Proteas batters run riot against the hapless Indian bowlers. Pant was fair in his opinion about the loss when he said “We had enough on the board, but I think we were a little off with the execution. But sometimes you have to give credit to the opposition. Miller and RvD batted well. Slower balls were working when we batted, but the wicket got better in the second innings. Mostly we executed our plans (to Miller) but the wicket got better and better. We were very happy with the total but next time we are in a similar situation we will do better”

Indian cricket fans weren’t one bit pleased with Rabada for the mid pitch tangle with Pant. The fans felt that the South African bowler was deliberate in his efforts to get Pant run out. The angry Indian fans took to twitter to vent their anger at Rabada and you can read it below.

Never a dull moment, when Rishabh Pant is in the middle.#INDvsSA #TeamIndia #INDvSA #RishabhPant pic.twitter.com/rVwRskXT52