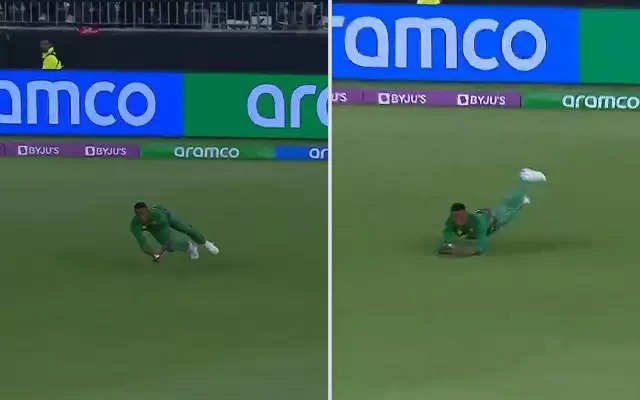 India and South Africa descended onto Perth to play their respective 3rd game of the 2022 T20 World Cup. The match is significant for both the sides as a win for India will all but seal their place in the final 4 of the T20 World Cup 2022. A win for South Africa will not only solidify their hopes for the semi-finals but also knock out Pakistan from the semi-final scenarios.

The two teams were greeted by chilly climate in Perth as India won the toss and chose to bat first. India made one change to the line up as Deepak Hooda came in for Axar Patel. South Africa too made a change as Shami was replaced by Ngidi for a game on a wicket which would offer pace and bounce.

South African bowlers were all over Indian batters like a rash as they were the men in blue’s throats at all times. Pandya walked into bat with the score reading 42/4. The Indian fans would have hoped for a stand between SKY and Pandya, but that wasn’t to be.

Ngidi bowled one short at the throat of Pandya who went for a hook shot and the ball flew down the fine leg region. Rabada ran in and swooped low to take a perfect catch as Pandya was sent back to the hut for 2.

what a catch 🔥#INDvsSA pic.twitter.com/a04ASn0NjS

Batting first, Captain Rohit Sharma and Rahul looked to be discovering some form when they bought struck sixes. Ngidi had both the openers in a single over, with Rohit caught and bowled for 15, while Rahul was caught in the slips for 9. Kohli was the next to go caught by Rabada for 12, while Hooda fell to Nortje, caught behind for a 3 ball duck. The fall of Pandya had India in trouble at 49/5.

The fall of Pandya got Dinesh Karthik to the crease to join Yadav as the pair added 52 runs for the 6th wicket. SKY was the main scorer as he played his 360 degree game to all parts of the ground. Karthik failed to get going as he scored mere 6 before holing to Parnell in the 1st ball of the 16th over.

Post the wicket of Karthik, the Indian team kept losing wickets as first Ashwin fell to Parnell and then four balls and 3 runs later it was the turn of SKY. The 32 year old Yadav scored 68 off 40 balls with 6 fours and 3 sixes as India ended up at 133/9 with Wayne Parnell picking 3 wickets.