Watch! Kuldeep Yadav casts his spell on the Sri Lankans and the Indian fans 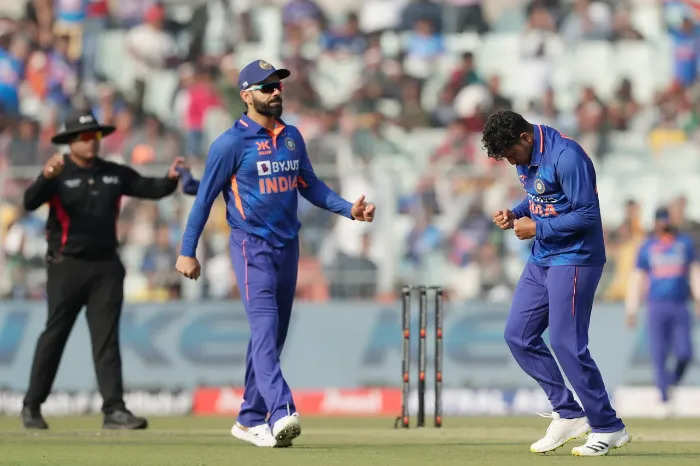 India and Sri Lanka played the first match at Guwahati on Tuesday. India won the 1st game by 68 runs to take a 1-0 lead in the series. India thanks to a century from Virat Kohli and half centuries by Gill and Rohit asserted their dominance. For the visitors it was Dasun Shanaka who fought back with a gritty maiden ODI century.

Sri Lanka won the toss and for some reason chose to bat first, despite the chance of dew playing a major factor. India made one change to their team as they got Kuldeep Yadav to replace Yuzvendra Chahal. Sri Lanka made two changes with Dilshan Madushanka and Pathum Nissanka being replaced by debutant Nuwanidu Fernando and Lahiru Kumra.

Sri Lanka got off to a good start as Avishka Fernando set the tone with a 17 ball 20 with 4 fours. The first wicket had added 29 before Mendis joined Nuwanidu Fernando and added 73. Just when Sri Lanka looked to be taking the game away, Rohit Sharma got Kuldeep Yadav into the attack.

Kuldeep soon repaid the faith of his captain, as he got one to turn back in sharply in the last ball of his 1st over. Mendis played down the wrong line and was given out LBW. The batter went up for DRS and the ball tracker showed Umpire’s call to send back Mendis back to the hut for 34 off 34 balls with 3 fours and a six.

Indian spinners break the back of Sri Lanka –

Axar Patel got into action the very next over, as the left arm spinner went through the defenses of Dhananjaya Dr Silva for first ball duck. Nuwanidu then fell after scoring his maiden fifty in his debut match when he was run out. Kuldeep, struck twice first castling Shanaka for 2, then getting Asalanka caught and bowled for 15.

Indian cricket fans were overjoyed to see the return of Kuldeep Yadav and you can read all the tweets below.

Kuldeep Yadav and Axar Patel strike in their first over!

Kuldeep needs to take 6 wickets, Last he took 5 wickets and he was dropped next game.
2nd ODI #INDvsSL #INDvSL #kuldeepyadav

Virat Kohli is more happier than Kuldeep Yadav for the wicket. This guy is such a joy. ♥️#INDvSL #INDvsSL pic.twitter.com/wP9SEqeSMm