Watch! Kyle Mayers bowls a ripper to get rid of Dewald Brevis 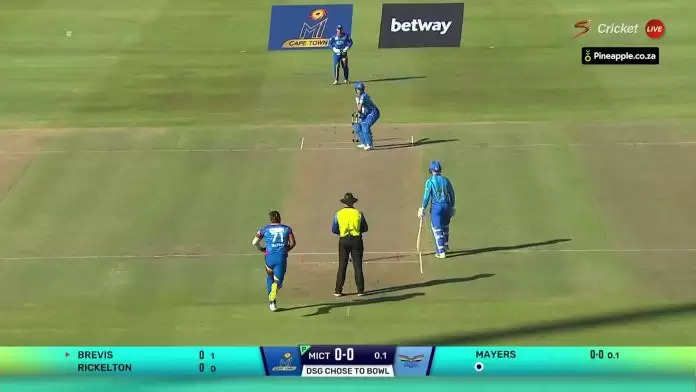 SA20 began amidst lot of fan fare as this was seen as South Africa’s proper journey into franchise cricket. The six team tournament began on Tuesday 10th January, 2023 with Paarl Royals taking on Mumbai Indians Cape Town team. All the 6 teams are being owned by the IPL franchisees. The tournament has begun at the right earnest with some amazing display by the bat and ball by the players.

Mumbai Indians Cape Towns began the tournament with an 8 wicket win over David Miller led Paarl Royals. In their 2nd game on Friday, the team from Cape Town played host to Durban Super Giants at Cape Town. Durban had already lost their 1st game of the tournament to Johannesburg Super Kings.

Dewald Brevis falls to a screamer by Kyle Mayers

Durban won the toss and chose to bowl first to the home team. Dewald Brevis who had scored an half century in the 1st game opened the batting with Rickelton. The 2nd ball of the game saw Mayers bowl a toe crushing yorker which ripped out the two poles of Dewald Brevis to send the youngster back to the hut for a 2nd ball duck.

Roelofsen’s half century leads Mumbai to 152 –

Put into bat, wicket keeper Roelofsen scored 52 off 44 balls with 4 fours and a six they were struggling at 45/4 at one stage. Brevis was out for a duck as his fellow opener Rickelton scored 14. Rassie Van Der Dussen and Sam Curran scored 1 and 0 respectively. George Linde then scored 33 off 25 balls with 4 sixes. Rashid Khan 14 not out and Delano Potgeiter with 25 not out off 11 balls helped MI CT reach 152.

Kyle Mayers and Quinton De Kock added 35 for the 1st wicket with De Kock falling for 11. Mayers scored 24, while Mulder with 30, Klassen with 36 and Keemo Paul with 20 not out saw Durban win the game by 5 wickets with 21 balls left in the game.