Watch! Lords members stand up to applaud Pujara after his marathon knock 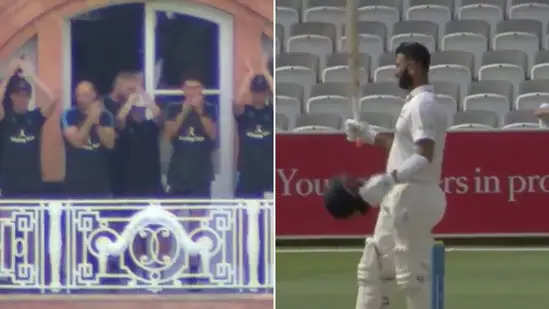 England is witnessing a rare heatwave that is taking the country by storm. The temperatures have hit nearly 40 degrees and the action on the field of cricket is also heating up. As we reported earlier the county season is witnessing 5 Indian players ply their trade. Krunal Pandya is yet to play for Warwickshire, but Pujara, Sundar, Umesh Yadav and Navdeep Saini are on the field for their respective counties. While Saini and Sundar picked 5 wicket hauls on their debut, Pujara is rattling the runs for Sussex.

Before the start of the latest round of County games, it was reported that Pujara has been named the captain of the Sussex side. The hove based side won the toss and chose to bat first. Pujara batting at number 4 scored an amazing 231 off 403 balls to help his side reach a massive 523 on the board. Pujara batted nearly 9 overs and hit 21 fours and 3 sixes in his marathon knock.

Pujara gets a standing ovation –

Pujara who was part of the Indian team for the fifth and final rescheduled test, has stayed back in England. He has been in rich vein of form during the county season and has already hit 3 double tons. Pujara was the last man out when he was caught by Stoneman of Helm. Once he was making his way back to the pavilion at the famed Lord’s he got a standing ovation in the long room.

Out onto the balcony to stand and applaud a fantastic innings. 👏@cheteshwar1 💯💯 pic.twitter.com/2hmvm9wMz4

At the other end was Pujara’s team mate Umesh Yadav who has inked a deal with Middlesex. The 34 year old right arm fast bowler bowled 29 overs and gave away 70 runs without picking a wicket. Yadav made a decent start to his county career with a wicket and 40 odd runs in his debut game.

Pujara during his 231 run knock for Sussex became the first batsman from the county based out of hove to score a double ton. The last Sussex batter to score a double ton at lords was in the year 1897. Pujara so far has played 6 games for Sussex this year before this game and has scored 997 runs this season. He has an average of 124.6 and is odds on favorite to score over 1000 runs this season.