Watch! Lucky fan gets a double delight as Dinesh Karthik and Ravichandran Ashwin click a selfie with him 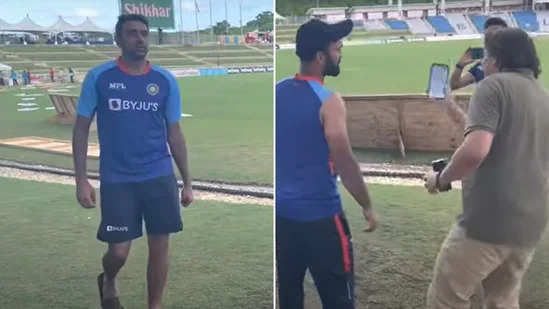 Indian cricket team seemed a happy bunch after their 68 run win over West Indies in the first T20. The win came after the Indian team had scored an imposing 190 runs on the board. The Indian bowlers then took over as they had the West Indies batting order caught in a slide as they ended their innings at 122 to fall short by 68 runs. The second and third T20 matches will now be played at St Kitts on Monday and Tuesday followed by the final two games that will be played at Florida. Two of the biggest architects were none other than the two mean from Tamil Nadu, Dinesh Karthik and Ravichandran Ashwin

Dinesh Karthik batting at number 7 came to the crease when India needed impetus. At one stage the Indian team did not look like going past 165-170 mark, but the entry of DK changed it all. Dinesh Karthik scored 41 not out from 19 balls to alter the course of the innings and help India reach 190 on the board. On the other hand Ashwin was his economical self when he had the ball in hand. Ashwin bowled 4 overs and picked 2 wickets for just 22 runs. Both the veteran Chennai based cricketers played a huge role in the massive win for the Indian team.

Post the game and the 68 run win the Indian team were a happy bunch. Even the Indian fans were happy as this could be the last time they see DK play in the Caribbean. The fans swarmed to the 37 year old to click selfies alongside him.

The whole video was shot by a journalist by the name Vimal Kumar and he uploaded the entire video on YouTube. The fan in question walked up to Dinesh Karthik and asked him for a selfie. Kartik was seen responding to the request and that's when Ashwin came into equation as he was seen standing alongside the fan even held up the camera to get a better angle for the selfie. This was a great touch by the veteran Indian duo as it made a fans day.