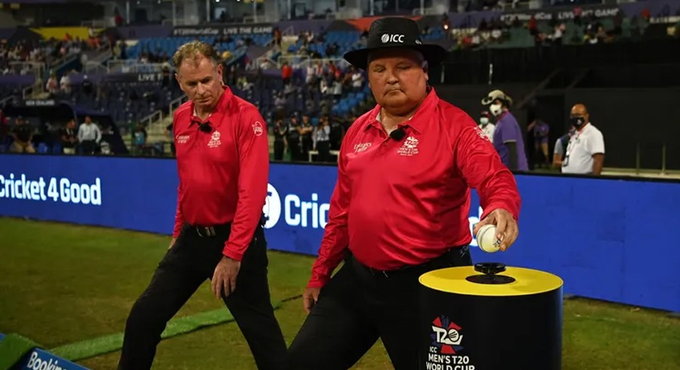 The first semi finals between Pakistan and New Zealand was played on Wednesday. The match was played at Sydney cricket ground. New Zealand came into the final four of the 2022 T20 world cup after topping their group. Pakistan on the other hand had to win their 3 games after losing the first two games and getting nearly knocked out of the tournament.

New Zealand won the toss and chose to bat first. Sydney cricket ground has a history of seeing teams batting first winning the game. At SCG 5 times the team batting first has went on to win with the Kiwis achieving this feat twice during this tournament. Pakistan too beat South Africa after batting first at the same ground just a week ago.

Shaheen Shah Afridi was given the new ball. The first ball was a loose ball which was hit for a four of the first ball of the match. New Zealand couldn't have asked for a better start to the innings.

The very next ball, Shaheen Shah Afridi and Pakistani team went up for a huge appeal. Umpire Marais Erasmus after a long deliberation put up his fingers. The batter Finn Allen went up for the DRS decision. It came to light that there was a huge sigh of relief for the Kiwis as Allen survived a close call. Marais Erasmus went up to Richard illingworth and first bumped him heaving a sigh of relief.

Finn Allen couldn't survive the next ball as Afridi came to get him out for 4. For the second time in 2 balls the kiwi batter went up for DRS call. This time though it came to light it was red on all 3 occasions.

Devon Conway scored 21 off 20 balls as the Pakistani bowlers tightened their stranglehold over the kiwi batters. The momentum shifted when Kane Williamson scored 42 off 40 balls with a four and six.

Daryl Mitchell who came into the tournament on the back of injury Mitchell scored 53 runs from 35 balls with 3 four and a six. This enables NZ to reach a competitive 152 on the board

The decision by Marais Erasmus had the cricket fans take to Twitter to have their say on the same. You can read all the tweets below.

All of Pakistan to Erasmus right now pic.twitter.com/l7yI29a7dY

Marius Erasmus has had a poor tournament. Another terrible decision by him (the first lbw) #NZvPAK #T20WorldCup