Watch! Massive fight between Rashid Khan and Dhanuska Gunathilaka during the super 4 game 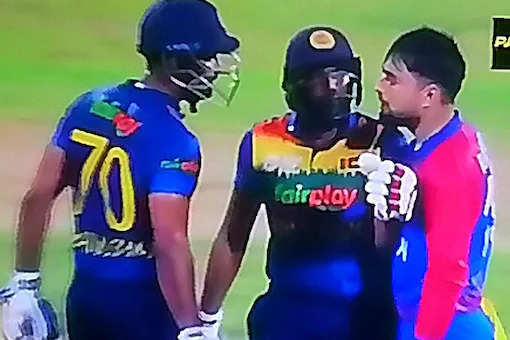 It was an exciting start to the Super 4 stage as red hot Afghanistan took on buoyant Sri Lanka at Sharjah. The Mohammad Nabi led side were in full form heading into the Super 4 as they had beaten both Sri Lanka and Bangladesh. The Sri Lankans on the other hand had to beat Bangladesh to get into the super 4 stage. The tide seems to have turned as the Shanaka led side have found a new lease of life and are playing some amazing cricket.

The fight as it happened –

Chasing 176 to win, SL were motoring along well when Dhanuska Gunathilaka and Bhanuka Rajapaksa were batting together. Rashid was smashed for a boundary by Gunathilaka and the Afghanistan spinner was seen giving a bit of verbal to the batter. The two had a coming together before Rajapaksa intervened to separate the duo from further interaction. Rashid Khan had the last laugh as he dismissed Gunathilaka in that very over when he had him bowled for 33.

Sri Lanka win the toss and out Afghanistan in to bat –

It was exactly a week ago that Asia Cup 2022 began with the same two teams playing. Sri Lanka had batted first and were bowled out for 105 and the Afghanistan team won with nearly 10 overs at hand. On Saturday, SL skipper Shanaka won the toss and bowled first.

Zazai and Gurbaz opened the batting and the pair were seen going hell for leather as they added 46 runs for the first wicket. While Zazai was watchful, Gurbaz was the one who went after the bowlers. Madushanka made the first breakthrough when he had Zazai bowled for 13. This got Ibrahim Zadran to the wicket and he added 93 runs in over 10 overs along with Gurbaz. The pair were severe on every Lankan bowler and put the bad balls away for boundaries.

The 93 run stand was broken when Gurbaz who was batting on 84 was caught by Hasaranga off Ashita Fernando with 4 fours and 6 sixes to his name. from there it was a steady procession of wickets as Afghanistan ended with 175 on the board. Last games hero Najibullah scored 10 ball 17 with one four and one six.

Sri Lankan openers get off to a quick start –

Chasing 176, Pathum Nissanka and Kusal Mendis were quick off the blocks as they added 62 for the first wicket. The pair were severe in the power play overs and never let the run rate creep up. Mendis was the top scorer with 36 from 19 balls with 2 fours and 3 sixes. It was Mendis who was out first falling to Naveen Ul Haq and he was followed to the hut by Nissanka who scored 35 when he was dismissed by Mujeeb.

Charith Asalanka fell for just 8 but Gunathilaka with 33, Shanaka 10 and Rajapaksa with 14 ball 31 and Hasaranga with quickfire 16 off 9 balls helped SL win the game with 4 wickets in hand and 5 balls to go. It was the perfect start for the 5 time Asia Cup champs in the Super 4 stage and a perfect revenge for the opening day loss to the same opposition.