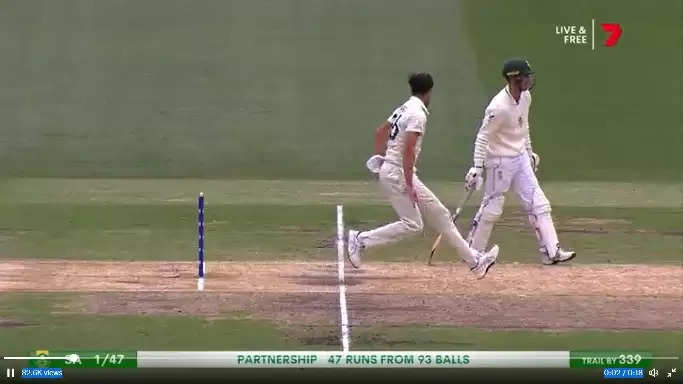 Australia beat South Africa in the 2nd test at the Melbourne Cricket Ground on Thursday. The loss to Australia has all but put the Dean Elgar led side in danger of missing out on the qualification for the finals of the World test championship.

It was yet another disappointing performance for the visitors as they lost by an innings. This performance came after getting bowled out for 99 in the 1st test at Gabba. South Africa finally reached the 200 mark after 7 test innings.

The incident happened early on day 4 of the game when Mitchell Starc was coming into bowl to Temba Bavuma. The Australian fast bowler spotted De Bruyn venture out of his crease. Starc did not deliver the ball and was heard telling De Bruyn, “stay in your crease, its not that hard”

"Stay in your crease, it's not that hard!"

Am not Deepti Jibe to Buttler –

Mitchell Starc was one of the most vocal critics to the Mankad dismissal by Deepti Sharma to dismiss an English batter which happened in 2022. The dismissal was talked about a lot and created a lot of controversy with voices and opinions divided. Starc, had delivered a similar warning to Jos Buttler during a T20I at Perth and said “Am Not Deepti”

Australia all but qualify for the WTC finals –

South Africa began their tour of Australia sitting at number 2 in the ICC WTC table. The first test loss at Gabba and India’s wins over Bangladesh meant South Africa had to win at MCG. The loss now means Australia have made it through the finals of the World test championship to be played at Oval in 2023. India now need to hope Australia make it a cleansweep against South Africa, because that will leave India just needing a 2-0 series result to make it to the finals of the 2023 WTC.

Coming into the 4th day, the odds were stacked against South Africa to save the game. Sareel Erwee was out for 21 followed by De Bruyn for 28. Bavuma then ran out Zondo for 1 before adding 63 runs with Kyle Verreynne for the 5th wicket. The stand was broken by Boland when he trapped the South African LBW for 33. Bavuma scored a fifty as wickets fell at other end. Steve Smith got the final wicket when he bowled Ngidi for 19 to secure a win by an innings and 182 runs to win the game and the series for Australia.