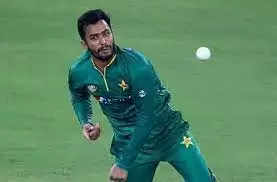 West Indies are currently touring Pakistan for a short 3 game ODI series with all the 3 games being played at Multan. The first game was won by Pakistan after a century from Babar Azam. The 2nd match witnessed yet another win for the home side as they took an unbeaten 2-0 lead in the series to take home another home series win. The star of the show with the bat was Babar Azam with 77 and Imam Ul Haq with 72, while Mohammad Nawaz was the star with the ball with 4 for 19.

Chasing 276 to win, the visitors had lost their first wicket at 4, when Shai Hope fell to Afridi for 4. Mayers and Brooks then added 67 for the 2nd wicket before Mayers perished for 33 of 25 balls. He hit 4 fours and 2 sixes before he was bowled by Mohammad Wasim Jr. West Indies were scoring runs at 7 runs per over and for once gave a fright to the Pakistani team.

Nawaz with the star turn –

The entire complexion of the match changed when Babar Azam got Mohammad Nawaz into the bowling attack. The 28 year first got rid of Brandon King for a 2nd ball duck bowling him through his defences. Nawaz then struck when he had the dangerous looking Brooks out LBW for 42. It was then the turn of the dangerous Powell who had struck a six. Powell was caught behind by Rizwan for 10 just when the visitors looked like fighting back. 2 runs and 2 balls later the fightback was over as Pooran was castled by Nawaz for 25 off 36 balls with a four and a six. Nawaz bowled 10 overs and picked 4 wickets for 19 runs. Nawaz for this effort was given the man of the match, as he helped the home team win the game by 120 runs.

Nawaz so far has played 3 tests for Pakistan and picked 5 wickets,in the ODI format he played 18 games picking 25 wickets. His 4/19 was his best figures so far in his career, Nawaz also has an ODI fifty to his name with the bat. Nawaz has played 30 T20 games for Pakistan picking 25 wickets with and economy of 7.1 runs per over after having made his debut ion this format in 2016.