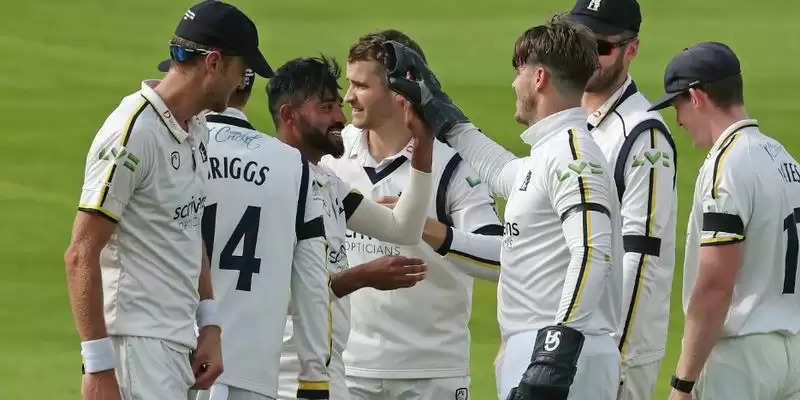 Indian cricket team is getting ready for some back to back cricket in the next few weeks to come. Indian cricket team first takes on Australia in a 3 match T20 series starting on 20th September. They then face off against South Africa, for the 3rd time this year, in a 3 match ODI and T20 series. The India squad for the T20 series was announced a few days ago, one player missing the home series and the T20 world cup is Mohammad Siraj. The right arm pacer has inked a short term deal with Warwickshire to play the county season.

Playing his first every county game, Siraj was in his elements when he was given the ball. Pakistani batter Imam Ul Haq, was the first to go when he slashed one wide outside stump to get a edge behind for 5. George Bartlett became the next wicket when he was caught behind for 12. The very next ball, Siraj had James Rew out LBW for a 1st ball duck.

Siraj gets a fifer on his debut -

Siraj then came and broke the 58 run stand between Josh Davey and Lewis Gregory. First he got rid of Davey for 21 and then the big wicket of Gregory for 60. Siraj finished with 5 for 52 on his county debut for Warwickshire. This spell helped the Warwickshire team to dismiss Somerset for a mere 219, despite the late surge from Pakistani Sajid Khan who scored 53 from 64 balls.

Warwickshire give the visitors a slender lead –

Somerset bowlers came out all guns glazing as they had the home team struggling at 22 for 3. Will Rhodes and Sam Hain put on 73 for the 4th wicket before Rhodes fell for 38. Jayant Yadav the 2nd Indian in the Warwickshire side scored 29 off 54 balls, adding 46 crucial runs with Hain. He was bowled by Jack Brooks with the score reading 141. Hain was the top scorer with 67 from 166 balls aided with 6 fours. Mohammad Siraj gave the fans some entertainment as he swung his bat for 21 off 34 balls and stayed unbeaten.

Armed with a 23 run lead, Somerset ended the day at 13 for 2, with an overall lead of 36. Siraj got the wicket of Imam Ul Haq again for a 5th ball duck, while Jayant Yadav went through the defense of Kasey Alridge for 0. Heading into day 3 the match is evenly poised in the Division 1 of the county championship.