Watch! Mohammad Siraj wrecks havoc on the West Indian batters in the 1st Over 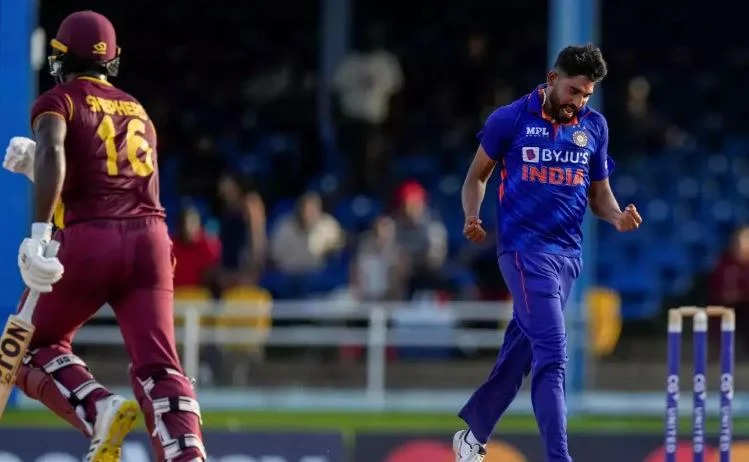 India on early hours of Thursday morning wrapped up a comprehensive win over West Indies. This meant that the men in blue have won the series 3-0 and did this feat for the first time in 39 years. The rain affected game saw West Indies being given a target of 257 in 35 overs at the Queens Park Oval ground in Trinidad and Tobago. While India have found some new match winner, 28 year old Siraj has started to show his worth with the white ball as well.

West Indies were tasked with the duty to chase 257 on the board, and the very first over was given to Deepak Hooda. The 27 year old bowled a maiden to start the proceedings. The first ball of the 2nd over of the chase from Siraj saw immediate action. Kyle Mayers played across the line and was bowled for a duck. Brooks walked in at 3 and was at sea right from the start. Siraj got one to angle in to Brooks and he too was out LBW for a duck.
Indian bowlers put up clinical performance with the ball –

Apart from, Brandon King and Nicolas Pooran who scored 42 each none of the other batters could conjure up a good score. Chahal picked 4 wickets with the ball as Siraj and Thakur picked 2 wickets each. Krishna and Axar Patel picked a wicket apiece. The Indian bowlers were clinical and kept the right line and lengths to the West Indian batters. The Indian bowlers made sure none of the West Indian batters could get off the leash.

Misery continues for the hosts –

Before coming into this game, West Indies had lost 5 ODI games in a row under the new regime of Pooran. They had lost their previous series to Bangladesh which was played ahead of the India series. The first two games saw the home team lose the games in close encounters, but the wallop on Wednesday will rankle the former world beaters for a long time to come.

Positives for India in this ODI series against West Indies:-