Watch! Mohammad breathes fire on his ODI comeback at Manchester versus England 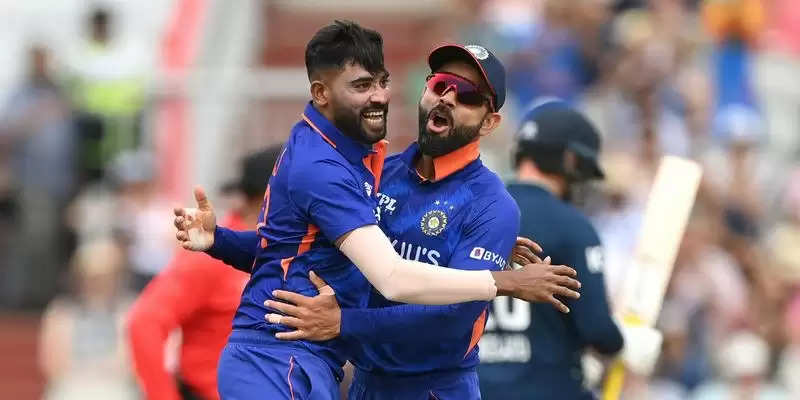 It is an important Sunday for Indian cricket and its fans as the men in blue face off against England. The match being played at Manchester is the 3rd and final game of what has been an engrossing ODI series. India won the first game at Oval by ten wickets as Bumrah with the ball and Rohit with the bat did the damage. In the 2nd ODI at Lord's, England scored 246 and bowled out India for 146 as Topley picked 6 wickets in the game and won by 100 runs to force a series decider. India won the toss and chose to bowl first as they made one change to the playing XI. Mohammad Siraj came in for Bumrah who was down with back spasms.

Mohammad Shami bowled the first over of the game and saw Jason Roy smack him for 3 fours in the over to take 12 runs off It. The 2nd over of the game was given to Siraj who was playing his 5th ODI for India. Bowling his 3rd ball he induced a leading edge of the bat from Jonny Bairstow to be caught by Shreyas Iyer for a 3rd ball duck. Root who hasn’t been able to replicate his test form during the ODI series played 2 balls. The final ball of the 2nd over saw the ball move and take the edge of Root's bat and get taken by Rohit Sharma at slip to give Root a 3rd ball duck.

Jason Roy and Ben Stokes though kept the pressure on the Indian bowling as the duo went after the bowlers. They were harsh on both Shami and Siraj who were smacked for boundaries at regular intervals. Against the run of play, Hardik Pandya bowled one short to Roy who went for a pull only to get caught by Pant. It was a vital strike for India as Roy was looking dangerous with 41. It was soon 74 for 4 when Pandya had Stokes caught and bowled for 27 to reduced the home side to 74 for 4.

The exploits of Mohammad Siraj had the Indian fans delighted as they took to twitter to express their joy and you can read all the tweets below.

Double wicket maiden over in a white ball game for Siraj… pic.twitter.com/WpoyQAMvWa

Double wicket maiden over in a white ball game for Siraj… pic.twitter.com/WpoyQAMvWa