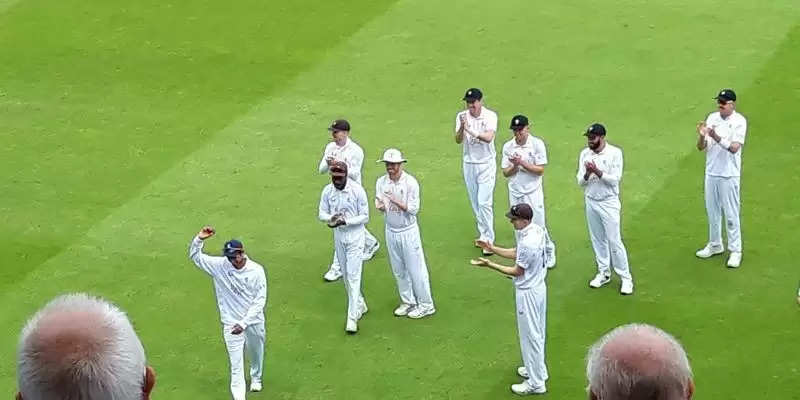 It has been a fascinating few days for the Indian contingent which is taking part in the County championships. The Indian players who aren’t part of the selection scheme of things are keeping themselves fit by playing in England’s domestic season. one of the 5 names is that of speedster Navdeep Saini who has signed up with Kent and is playing against Warwickshire. The 29 year old last played for India in 2021 during the short tour of Sri Lanka under Shikhar Dhawan. Since then he has been out of favor with the Indian selectors.

Navdeep Saini made his county debut at Birmingham and his first 3 overs were hammered for 34 runs. Saini then came back into the attack and picked his first wicket when he sent back Chris Benjamin for 7. Saini and Sam Billings then combined for the next 4 wickets to decimate Warwickshire. Dan Mousley, Dan Burgess, Henry Brookes and Craig Miles were the batters who were caught behind by Billings off the extra pace of Saini. The 29 year old ended with 5 for 72 from 18 overs with 4 maidens as Sam Billings pouched 7 catches.

Batting first, the Warwickshire bowlers had the visitors on the mat at 43 for 6 before a fightback from the lower middle order. Jordan Cox with 48, Sam Billings 33 and Kiwi international Matt Henry with 34 helped Kent reach 165. For the home side Oliver Dalby picked 6 wickets.

Apart from the wicket blitz from Saini, it was the 99 from Sam Hain and 32 from captain Will Rhodes that helped the home side reach 225 and gain a 60 run lead. 8 batsmen fell for single digits with 2 falling for ducks. Matt Henry and Matt Milnes picked 2 and 3 wickets each.

Kent ended day two with Joe Denly batting on 70 not out along with Jordan Cox who was on 40. Kent has a lead of 138 with 6 wickets in hand and 2 days left to play. Ben Compton was the first to go for 5, followed by Zak Crawley for 25. Daniel Drummond was out for 27, while Jack Leaning was out for 5. Oliver Dalby picked 2 wickets, while Rhodes and Miles picked a wicket each.