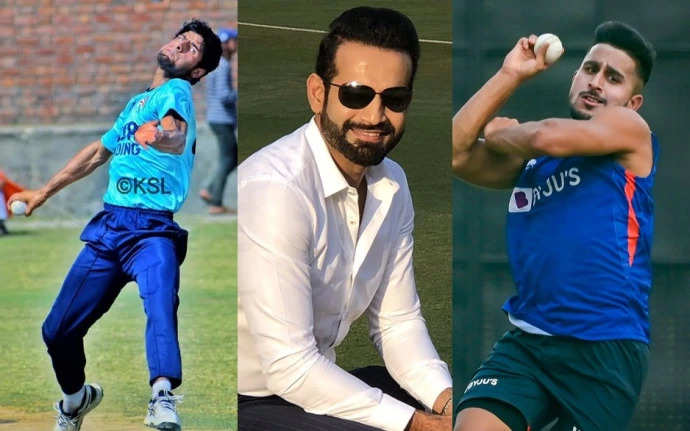 Indian cricket since the start of its time has been known for its batting talent. When it comes to bowling, it was spinners that took the cake and created a renown for India. Ever since, Kapil Dev came into the picture, the Indian pace bowling stocks have slowly increased.

Over the last decade and a half, Indian fast bowling as grown leaps and bounds. While the rest of the world had bowlers who could clock 150 KPH, India still was lagging behind. This changed with the arrival of Umran Malik, who is set to storm the world with his pace.

Umran Malik came into the limelight for his tear away pace during the IPL 2021 season for SRH. The young quick from J and K was retained by SRH for the 2022 season and bowled the 3rd fastest ball of IPL history at 157 KPH vs Delhi Capitals.

Yet another Jammu and Kashmir star on the rise –

Young fast bowler Wasim Bashir has been creating ripples on social media. The 22 year old tall and lanky pace bowler can be seen hurrying batters and hitting them on the helmets and beating them for pace.

Since the video came out, there has been a genuine excitement and anticipation at the plethora of talent available in the valley. A twitter user by the name Mohsin Kamal tweeted and wrote “next 150 KMPH from Kashmir? Are there more Umran Maliks in J and K? yes, this is Waseem Bashir, a 22 year old pacer from Kashmir, who probably bowls over 145 KMPH (could even be 150 KPH +) he is part of the J and K U-25 team and scaring batters with his pace #IPL teams take note”

Next 150kmph from Kashmir!
Are there more Umran Maliks in J&K? Yes, this is Waseem Bashir, a 22-year-old pacer from Kashmir, who probably bowls over 145kmph (could even be 150kmph+)!
He is a part of the J&K U-25 team and has been scaring batters with pace! #IPL teams take note pic.twitter.com/0ijkDt21xh

While Umran Malik has already earned his India ticket, there is also Kuldeep Sen who is slated to be part of the Indian team for the ODI series vs NZ. Then there is the young brigade of Kartik Tyagi, Shivam Mavi and Kamlesh Nagarkotti. The trio on their day can easily clock above 145+ and touch 150 KPH.

With so much fast bowling talent, there is genuine belief that the Indian fast bowling reserves are anything but bare.

Speaking about Wasim Bashir, the 22 year old was part of the KKR trials during the 2021 season. Speaking to news channels, the fast bowler said “It is a dream of every cricketer to play in the IPL and international cricket, and that is what am aiming for”

The new sensation from J and K had the fans talking in excited tones on twitter and you can read all the tweets below.

Who says we don’t have pacers . Look at this new umran Malik in making . https://t.co/3abjzettWd