Watch! Pakistani players collide while going for a catch to dismiss Rajapaksa 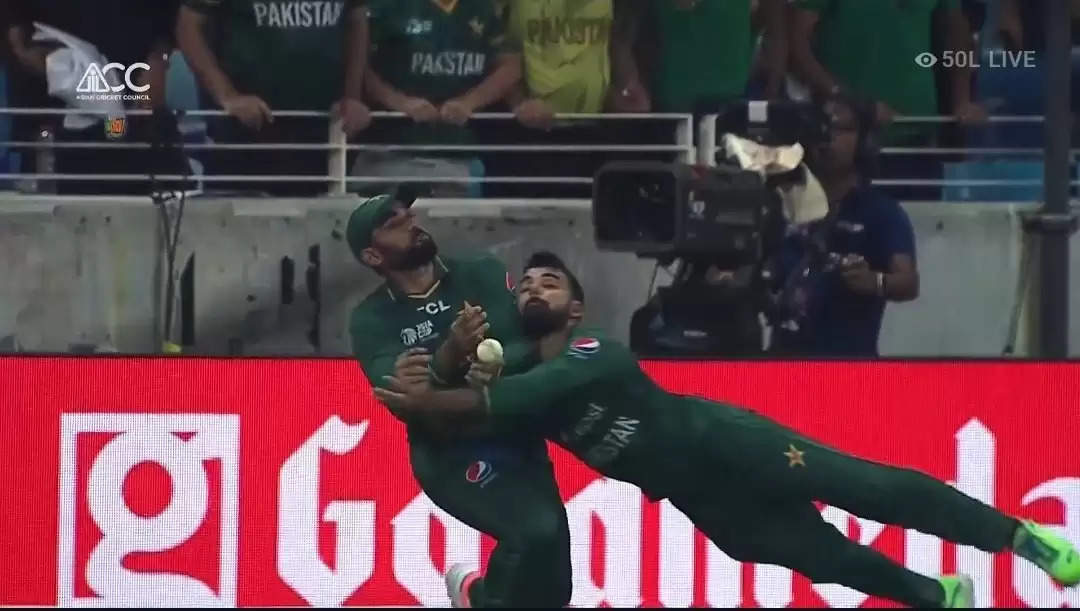 2022 Asia Cup final has been one hell of an affair as both Pakistan and Sri Lanka have gone after each other. Sri Lanka and Pakistan both came into the tournament with a loss in their opening game. While Afghanistan beat Sri Lanka to open the tournament, Pakistan lost to India. Despite the losses, both the teams played well during the Super 4 stage to reach the final.
Pakistan wins the toss and choose to bowl –
Babar Azam won the toss and chose to bowl first and made two changes to the side with Hasan Ali and Usman Qadir being replaced by Naseem Shah and Shadab Khan. Sri Lanka on the other hand did not make any changes to their 11. They went in with the same team that beat Pakistan on Friday in the final Super 4 game.

Shadab Khan and Asif Ali suffer a nasty collision –
Bhanuka Rajapaksa was the man in form as he had bailed out the Sri Lankan team out of trouble. The final ball of the 19th over, bowled by Hasnain, saw Rajapaksa go for a huge hit. Asif Ali and Shadab Khan both went for the catch and both collided with each other. To make matters worse, the ball was parried over the ropes for a six. The medical team came out to check on the two players. Shadab Khan came off worse as he was still feeling the pain sitting outside the boundary.
Sri Lanka rocked early –
Put into bat first, Sri Lanka lost their in form opener Kusal Mendis yet again for a first ball duck. Naseem Shah had his stumps flattened. Nissanaka and Dhanajaya De Silva added 21 for the 2nd wicket, but Nissanka was out for 8 caught by Azam off Rauf. It was soon 36 for 3 when Gunathilaka lost his off stump to Rauf for 1. Ifthikhar Ahmed got into contain Rajapaksa got the big wicket of De Silva for 28, while Shanaka was out bowled for 1 by Shadab Khan. This left Sri Lanka at 58 for 5 with still more than 11 overs to go.
Rajapaksa and Hasaranga lead the fight back –
Sri Lanka have been resilient throughout the tournament and they showed their spirit yet again. Hasaranga and Rajapaksa added 58 runs in just 6 overs to lead the fightback. Both the batters threw caution to the wind as they went after the Pakistani bowlers. The stand was broken when Hasaranga was out for 36 off 21 balls with 5 fours and a six. He was dismissed by Haris Rauf caught by Rizwan.
Bhanuka the show stealer for SL –
Bhanuka Rajapaksa has always been spoken about as a talented batter, but on Sunday he proved what a match winner he could be. The 30 year old scored 71 off 45 balls with 6 fours and 3 sixes, to lead Sri Lanka to 170. In the final over bowled by Naseem Shah, Rajapaksa first paddled him for a four, then followed it up with a massive six over deep cover boundary. Once that went for six, he lofted his arms in delight as he knew he had helped SL to a huge score on the board.