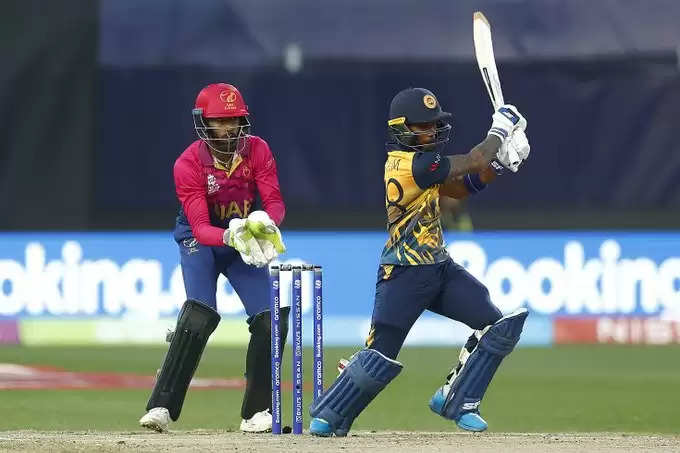 Saturday saw Sri Lanka and New Zealand lock horns in the only game of the Super 12 stage of the 2022 T20 World Cup. The match was played at the famed Sydney Cricket Ground. It was an important game for both the sides as they needed a win to keep their hopes for a place in the final four of the group stage alive.

New Zealand began their campaign with a huge win over Australia last Saturday. The repeat of the 2021 T20 World Cup saw the Kiwis emerge winners by 89 runs at the same SCG ground. Their next game against Afghanistan was rained out and they had to share points.

Sri Lanka on the other hand beat Ireland in their first game before losing to Australia. New Zealand won the toss and chose to bat first as Daryl Mitchell came in for Mark Chapman. Sri Lanka made a change as well as Binru Fernando was replaced by Kasun Rajitha.

New Zealand was struggling at 29/3 in the 7th over with Wanindu Hasaranga bowling to Glenn Phillips who was batting on 12. Hasaranga bowled one flighted ball outside off as Phillips went over extra cover. Nissanka who was at the boundary got to the ball, only to fumble it a few times and drop an easy catch much to the shock of the Lankan players.

Glenn Phillips makes the Lankans pay for the mistake –

Playing his 51st match for New Zealand, 25 year old Glenn Phillips who was born in South Africa scored his 2nd T20I century. The right hander scored 104 off 64 balls with 10 fours and 4 sixes. His innings just had that one chance as he peppered the Sri Lankan bowlers to each part of the ground.

Sri Lankan spinners struck early when they had the Kiwi openers falling cheaply. Theekshana got the wicket of Allen for 1, while Conway was bowled by De Silva for 1. Williamson was caught behind by Mendis of Rajitha for 8 to leave the Kiwis at 15/3.

Mitchell and Phillips then added 84 for the 4th wicket before Mitchell was out for 22 bowled by Hasaranga. Phillips held the innings together with some useful contributions coming from lower down the order to help NZ reach 167/7 on the board.

Chasing 168 to win, Trent Boult picked 4/13 from his overs as Sri Lanka were bowled out for mere 102. This meant that the 2022 Asia Cup champs lost the game by 65 runs. Bhanuka Rajapaksa with 34 and Dasun Shanaka with 35 were the top scorers for Sri Lanka. After losing 4 wickets for 8 runs the Lankan batters couldn’t put up a fight to the seam and swing of the Kiwi bowlers.

The dismal fielding lapse by Pathum Nissanka did not leave the twitterverse happy as they put forward their views in the tweets which you can read below.

Pathum drops a catch off him. Not the support Hasaranga was looking for https://t.co/glnv9BoWlI

Pathum Nissanka drops a soda bottle at long-off as Glenn Phillips gets an extra day to tell his tale...

New Zealand could have been 4 down, but! #T20WorldCup #NZvsSL #PathumNissanka

Thank you Pathum for that drop catch. The clumsier the better. #lka #NZvsSL

Ohh drops it
Pathum has dropped a sitter#NZvSL #T20WorldCup