Watch! Pujara roll his arm over for Sussex against Leicestershire 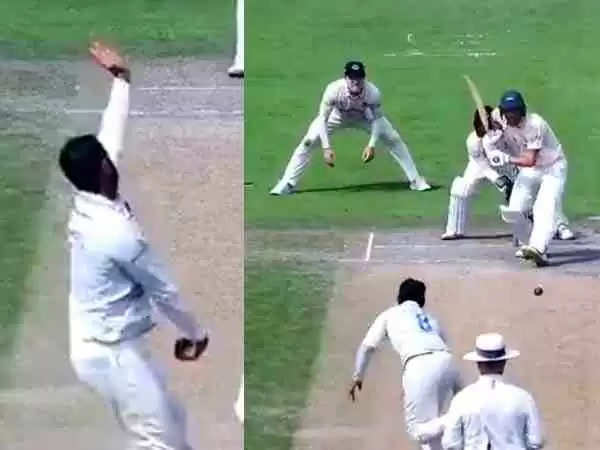 Cheteshwar Pujara is known for his stellar and stoic batting ever since he made his debut for India in 2010. The 34 year old has played the best of bowlers during the course of his India career in test cricket. Pujara who played the 5th rescheduled test just a few days earlier, is now back to fulfill his commitments with Sussex. Pujara had scored over 700 runs before he was called into the Indian squad for the Edgbaston test. Now back with the side based out of the Hove in the 2nd division.

Leicestershire have made a big come back after seeing the Sussex scored a huge 588 on the board. Pujara was called into bowl to give the main bowlers a rest, Pujara bowled a single over. Pujara was seen bowling leg spin and the first ball he bowled went for a four off a long hop. The next few balls were given respect, but the last ball was again hit for a four. Pujara ended up bowling 1 over and conceding 8 runs during his only stint with the ball for Sussex.

Pujara scores 46 on his return to Sussex –

It was a batting beauty at Hove as Sussex batted first under proper conditions for cricket with the sun shining bright. Ali Orr and Tom Haines began briskly by adding 147 for the 1st wicket scoring at over 5 runs per over. Batting at number 3 Tom Aslop scored 243 ball 150 with 16 fours while batting for exactly 5 hours. Pujara scored 46 off 76 balls with 8 fours before falling LBW to Ackermann. The Sussex lower order saw Oliver Carter and Delray Rawlins score 75 each as James Coles scored 59 to help Sussex score 588.

Chasing 589 to take the 1st innings lead, Hassan Azad was bowled of the 1st by Steven Finn. Louis Kimber and Rishi Patel added 174 runs for the 2nd wicket as Kimber scored a quick 104 off 149 balls with 11 fours and 3 sixes. Finn got the wicket of Kimber when he trapped the centurion LBW. Rishi Patel was joined by Ackermann and the pair added 74 more runs for the 3rd wicket. Rishi Patel though was out for 99 off 240 balls with 17 fours and a six before he was snapped by Coles caught by Carter. Lewis Hill became Finn’s 3rd wicket when he was caught and bowled for 10.

At the time of writing Leicester saw Ackermann batting on 137 with South African Wiaan Mulder was not out on 110 and the pair had added 201 runs for the 5th wicket as Leicester were 480 for 4.