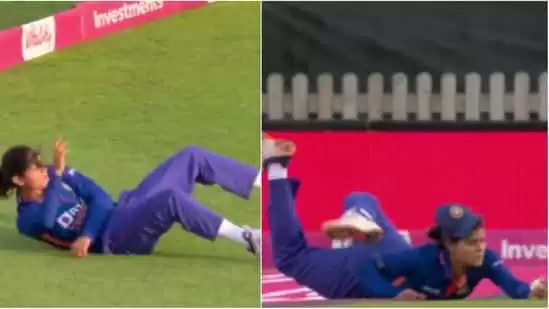 Indian women’s cricket team is in England to play a quick tour, which consists of 3 ODI’s and T201’s. The first T20 was won by England, at the riverside ground by 9 wickets to take a 1-0 lead. India though stormed back into the series by winning the 2nd T20 at Derby. The Indian eves won by the game by 8 wickets to level the series 1-1 as they head into the third and final game on Thursday, which is to be played at the County Grounds at Bristol.

Radha Yadav steals the show with her fielding-

The last ball of the 3rd saw, Renuka Singh bowl to Alice Capsey. The batter caressed the ball through the off side with a beautiful shot. Radha Yadav though diving to her right threw the ball despite being on the floor. Harmanpreet Kaur picked the ball and threw it to the wicket keeper to dismiss Alice Capsey for 4.

The night for Radha Yadav wasn’t done just yet, Bryony Smith played a chip off Sneh Rana while she was on 16. Much to her horror, Radha Yadav came running in and dived full length to get rid of Smith. The Indian fans in the crowd were happy to see such an effort as the English fans had their mouths open in shock.

Kemp and Bouchier help England reach 142 on the board –

England at one stage were 54 for 5, but Maia Bouchier and Freya Kemp added 65 runs for the 6th wicket. Bouchier scored 34 off 26 balls, while Kemp stayed not out on 51 off 37 balls with 3 fours and 3 sixes. This helped England reach 142 for 6, despite being in huge trouble at one stage. Sneh Rana was the top wicket taker for India with 3/24.

Chasing 143, India lost Shafali Varma for 20 off 17 balls, and Hemlatha for 9. Opener Smriti Mandhana though stayed not out on 79 off 53 balls to guide the Indian team to an 8 wicket win. Her knock contained 13 fours, as Harmanpreet Kaur gave her company to add unbeaten 66 runs for the 3rd wicket. Kaur was not out on 29 off 22 balls with 4 fours.

India on the back of this win head in to the final game on Thursday with the 3 match T20 series tied at 1-1.