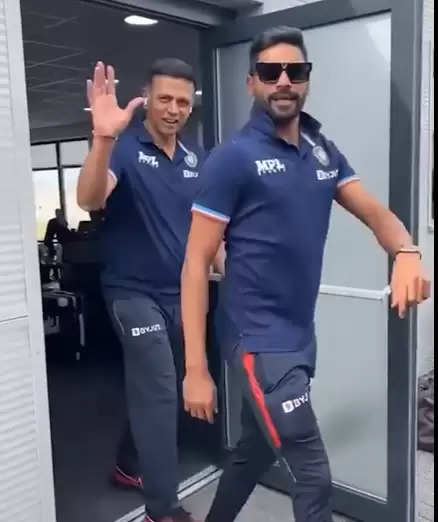 International cricketing action is coming thick and fast as we will next see India on a white ball tour of West Indies. India begin the series with a 3 match ODI series to be played at Trinidad at the Port of Spain. Shikhar Dhawan is leading the Indian side in the ODI format as Rohit Sharma has been rested. The 5 match T20 series will see Rohit back at the helm. The West Indian team is coming into the 3 match series on the back of a series loss to Bangladesh.

Rahul Dravid’s reaction says it all –

Indian team has touched down in West Indies as they get ready to play the first ODI starting on Friday. Shikhar Dhawan who led the Indian side last year during the tour nof Sri Lanka is being entrusted with the ODI leadership. A short 5 second video is doing the rounds on Twitter of the Indian team landing. The video shows Shikhar Dhawan looking upbeat with Shreyas Iyer following suit. Chahal and Ishan Kishan next wave to the camera followed by Shubman Gill, Ravindra Jadeja and Siraj. The highlight of the clip is the normally serious Indian Coach Rahul Dravid breaking into a grin with the youngsters and waving to the camera.

Indian top order during the ODI series was miserable as Shikhar Dhawan wasn’t able to score much. While India won the first ODI by ten wickets while chasing 111, the next two games saw both the Indian openers falling cheaply. Shikhar Dhawan who isn’t part of the T20 plans has to score runs to make himself in the scheme of things for the ODI world cup next year to be held in India. Dhawan is likely to be partnered at the top by either Shubman Gill or Ishan Kishan. Ruturaj Gaikwad too stands a good chance to make it to the top of the batting order as an opener after his impressive scoring during the Vijay Hazare trophy early this year.

India and West Indies play all the 3 games at Trinidad’s port of Spain stadium, followed by the first T20 at Brian Lara Cricket ground. This will be followed by 2 T20’s at St. Kitts and the final 2 games at Florid.