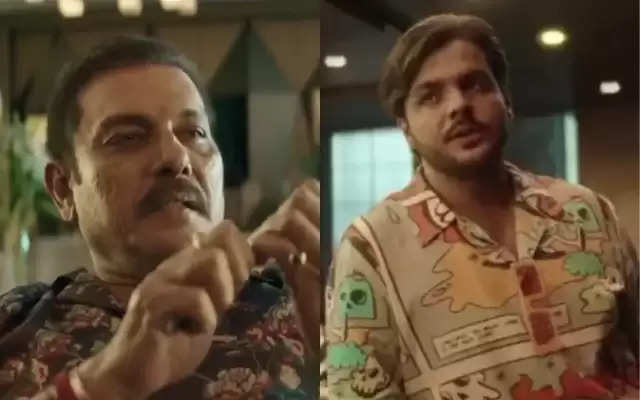 The Indian cricket fans are eagerly waiting for the final ODI between India and England to be played on Sunday at Manchester. Before the tour can even get over, the Indian team is already having its eyes on the upcoming tour of West Indies, which begins on 22nd July with the first ODI at Port of Spain. Before the series former Indian player, captain and coach and now commentator Ravi Shastri is hogging all the headlines. Ravi Shastri known for his booming voice and strong personality was spotted in an ad ahead of the start of the India tour of West Indies series.

Ravi Shastri is currently in England as a part of the SKY Sports booth commentating for the India- England series. The former Indian coach recently took to Twitter to give a little teaser of his ads along with known YouTube personality Ashish Chanchalani as the two come together for an ad. The two can be seen having hilarious conversations as a part of promo for FanCode which is going to broadcast the India tour of West Indies. Once the ads came out and featured Ashish Chanchalani who has a huge fan base and millions of followers, the ad created a huge buzz on social media.

For the first time, Fan Code will be broadcasting the Indian matches exclusively during their tour of West Indies. Fan Code has been showing the ongoing Bangladesh Tour of West Indies amongst other matches. DD Sports will be showing the matches live in the remote parts of India as none of the other TV Channels have been signed to show the series live.

India play all the 3 ODI matches at the Post of Spain stadium in Trinidad and Tobago. The captain of the side is Shikhar Dhawan as Rohit Sharma has been rested. Virat Kohli has been rested for the entire tour, along with Bumrah. The tour will test the likes of Ishan Kishan, Sanju Samson, Deepak Hooda and others who make a claim for berth in the ODI set up.

Rohit returns for the T20 matches -

India begin their T20 leg with a game at the Brian Lara stadium at Trinidad, followed by two games at St Kitts and the final two games at Florida in the United States of America. Rohit Sharma will return to captain the side and get his wards ready for the huge T20 World Cup later this year.