Watch! Ravindra Jadeja changes the course of the game with 2 amazing catches 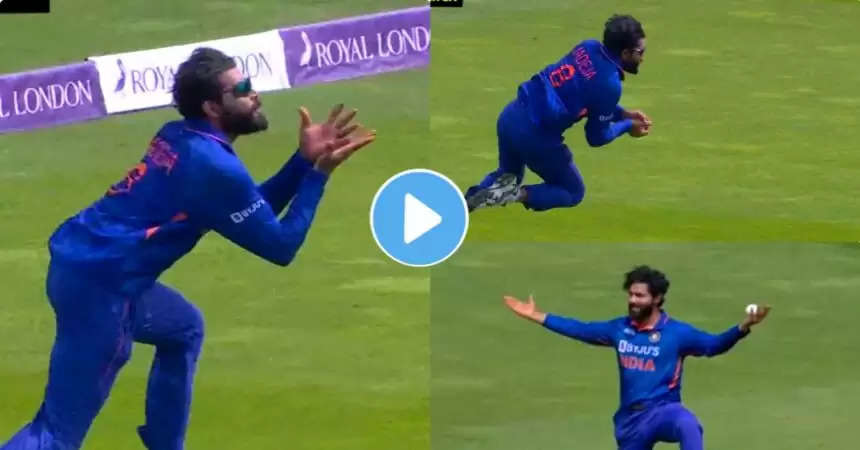 It is an hot day at Manchester on and off the field as India takes on England in the final ODI of the 3 match series. The series is evenly poised at 1-1 after India won the Oval ODI and England came back to win Lords. India won the toss and chose to bowl first, as Siraj came in for Bumrah who pulled out due to spasm in his back. Post this ODI some of the senior players like Virat Kohli, Rohit Sharma and Bumrah have been rested for either part or entire West Indies tour.

Local boys Liam Livingstone and Jos Buttler were motoring along with a 49 runs stand to put Rohit Sharma under pressure. The Indian captain threw the ball to Hardik Pandya and the 3rd ball of the 37th over when Livingstone pulled a short ball from Pandya and Jadeja took an amazing catch. The first ball of the over had seen Pandya being pulled for a six. The Baroda all rounder pulled back on the length and had Livingstone out for 27. The final ball of the over saw Pandya bowl short again as he had Buttler pulling and Jadeja made up ground to take a tumbling catch. Buttler was out for 60 and England were in trouble at 199 for 7.

Pandya stars with the ball –

England were rocked early when Siraj had the wickets of Bairstow and Root in the 2nd over of the game. This was Siraj’s first ODI game for 5 months and he marked it with a wicket maiden. That’s when Roy and Stokes added 54 for the 3rd wicket before Pandya got Roy for 41. The English opener went for a pull only to be caught by Pant, while Ben Stokes tried to charge the bowler and was caught and bowled for 27.

Moeen Ali and Buttler added 75 runs in quick time before the first ball from Jadeja’s spell saw Ali go for a sweep and be dismissed caught behind for 34.

Hardik Pandya vs Liam Livingstone battle in this series has been awesome.