Watch! Rishabh Pant’s mayhem to seal the deal for India as Twitter reacts 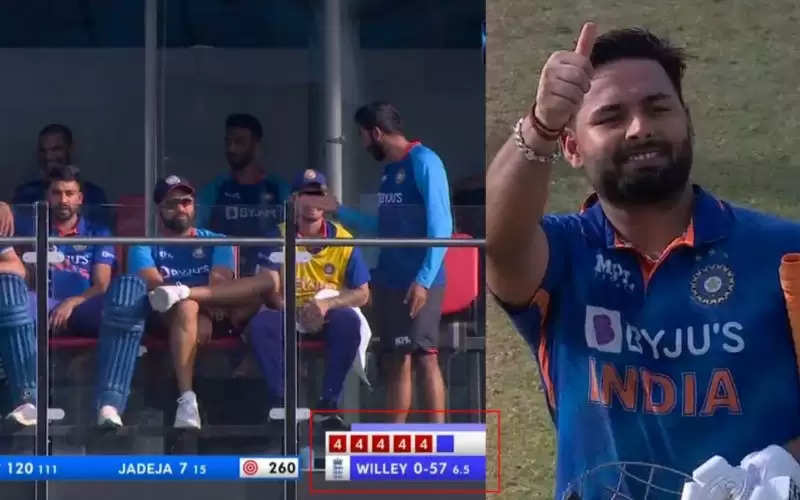 The cricket fans who watched the game live at Manchester and on the television on Sunday, will not forget the name Rishabh Pant for a long time. The 24 year old Indian wicket keeper showed his coming off age with a splendid first ton in ODI cricket. Rishabh Pant who had been constantly been called out for poor form in the white ball format finally showed his class. His 1st ODI ton not only won the game for India by 5 wickets, but also the series with a 2-1 margin.

Pant had just scored his maiden ODI ton in the 5th ball of the 41st over when he short arm pulled Overton for a single. India by the end of that over needed just 24 runs from 9 overs with 5 wickets in hand. The first ball of the over was a pull shot which went straight down the ground for 4. The 2nd ball was yet another pull shot to another short ball by Willey. The third ball was a brutal drive through the off side which had the fielders standing still. The 4th ball was an improvised pull shot over the fine leg boundary for the 4th four. The 5th ball saw the 5th four via a brutal lofted on drive, which set the pulse racing.

Pant finishes it in grand style –

The Indian fans in the ground and watching live on TV wanted to see Pant finish the game with 6th four. Much to the disappointment of all, it was a Yorker which pant dug out to take a single. It was soon over as Buttler introduced Root to bowl the 43rd over and had a slip. Root had got the wicket of Pant in the 5th test recently, and floated one outside off stump. Pant got down on his knees as he reverse swept Root for a 4 and it was all over. Pant was given a warm applause by the English crowd as Bairstow gave him a hug. Rohit Sharma gave Pant a thumbs up as Pant reciprocated with the same.

Indian legend had a 45 minute talk with Rishabh?

Post the game, the cricketing fraternity got down to laud the efforts of Pant, and took to twitter to do the needful. Former Indian legend Yuvraj Singh wrote “looks like the 45 minute conversation made sense!! Well played @Rishabhpant17 that’s how you pace your innings @hardikpandya7 great to watch”. Not only Yuvraj but other legends like Sachin Tendulkar and Sehwag along with Harsha Bhogle and even Barmy Army lauded the effort by Pant. You can read all the tweets below.